When Coats of Arms Wear Many Hats

Capping our last post on medieval heraldry, this week’s post is dedicated to heraldic headgear and the stories it can tell us.  The previous post addressed, among other things, the symbolic meanings and associations linked to the colors of a coat of arms.  But what about their sartorial add-ons, like the hats here (and above)?

Hatted coats of arms bedeck this opening in a list of the Venetian nobility, TM 802, ff. 13v-14

Today’s post focuses on different kinds of meaning recorded in coats of arms, specifically, what caps and crowns like these can tell us about the histories of the bearers of these arms or their families – or even about the manuscripts in which they survive. 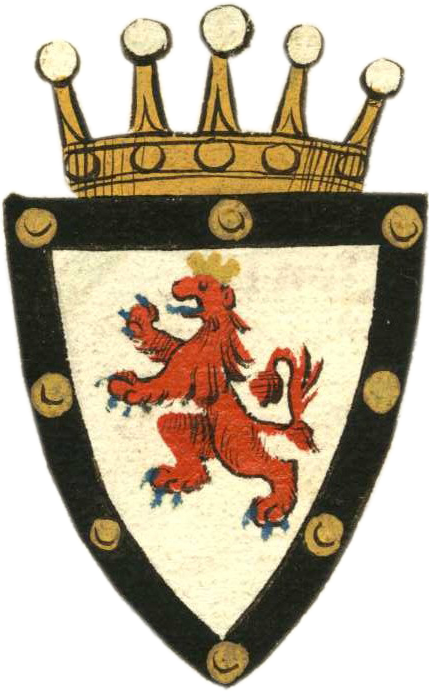 Consider this Tudor roll of arms.  It contains a genealogy of the English royal family, which explains the abundance of crowns and coronets surmounting these coats of arms.  But why so many different kinds of crown?  The two largest crowns in the center of the page surmount the combined arms of fourteenth-century kings of England Edward II  and Edward III  and of their queens’ families.

The two remaining types of crown are coronets denoting the ranks of duke and count.  In one instance the ducal coronet surmounts the combined arms of David II, king of Scotland, and his English wife – perhaps a slight on Scotland, which England had attempted to annex in both the fourteenth and sixteenth centuries. The other coronet more predictably accompanies the combined arms of John I, Count of Holland, and his English wife.

And what of the arms with no crown whatsoever?  These belong to Alphonso, heir to the throne of England, who died at the age of twelve and was therefore never crowned.  His younger brother, Edward, subsequently bore these arms (specific to the heir apparent) and later became the ill-fated Edward II.

But back to the manuscript with the hats!  This sixteenth-century book presents the arms of the Venetian nobility, a subject in keeping with its broader focus on who counted among that nobility and why.  Here there are no royal crowns in evidence.

A selection of arms from the list of the Venetian nobility, TM 802 (details)

Venice was a republic at the time and subject to neither king nor emperor. Instead, the Republic of Venice was governed by a doge, who was elected for life; an aristocratic senate; and a number of councils, most notably the Great Council, whose members were drawn from the very families identified in this manuscript.  Even at a glance, this manuscript attests to the fact that a number of doges were appointed from these families too.  The unusual hat atop so many of the Venetian arms actually represents part of the doge’s regalia and is known as the corno ducale, the doge’s crown.

Doge Leonardo Loredan (1436-1521) wears the corno ducale in this portrait by Giovanni Bellini, painted after his appointment in 1501, London, National Gallery

And there’s more.  The doge’s crown was not the only kind of headgear that a Venetian might be honored to set atop his arms.  When a member of one of these families was appointed to high ecclesiastical position, specifically cardinal or pope, the appropriate headgear has also been included. 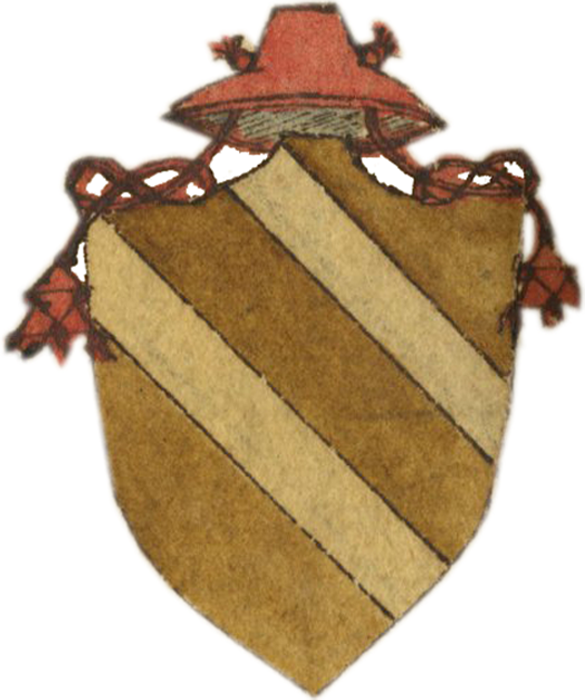 The hatting did not even end with this manuscript’s production.  There are several clear instances in which later (and somewhat less artistically gifted) hands have added hats – several doge’s crowns and a cardinal’s hat – atop (or beside) a family’s arms.

In addition to two added lines updating this entry for the Cicogna family, note the somewhat smudged and clumsy corno ducale that has been added to the family arms, TM 802, f. 10 (detail)

These additions provide valuable information about this manuscript.  Specifically, they help narrow the period when this book could have been produced.  For example, we can be reasonably certain that this portion of the manuscript was completed before 1585 because this was the year when the first doge from the Cicogna family was appointed and the corno ducale above the Cicogna arms is not the work of the original artist.  It was added at a later date, presumably shortly after Pasquale Cicogna’s election.  (And, indeed, other evidence corroborates this pre-1585 dating, as you can read in our full description of the book.)

Even more significant, though, is the mere existence of these additions.  A similar doge’s crown above the Sagredo family arms tells us that as late as 1674, when the first doge in the Sagredo family was elected, this book had belonged to one or more owners who were not only keeping abreast of Venetian politics, but were invested enough in what this book stood for that they were updating it.  Drawing awkward peaked hats into the margins of the books, they were keeping a record of the continuing achievements of Venice’s noble families.