Advice for the Brokenhearted in the Sixteenth Century

Heartbroken lovers today don’t need to deal with their grief alone.  There are plenty of advice columns and podcasts to go to for help after a breakup ends a relationship, or a divorce or death ends a marriage – Modern Love, Dear Sugars, Captain Awkward, Ask Amy (to name just a few).

This isn’t new.  Way back in the fourth century, the great church father St. Jerome (347-420) spent a lot of time writing letters and giving advice.  Which brings us to our subject today, a French translation of one of St. Jerome’s letters, found in a very elegant illuminated manuscript copied in France, probably in Bourges, c. 1500-1510.

Jerome’s letter is addressed to a woman named Furia, who wrote to Jerome for advice after she was widowed.  Today we would probably encourage Furia to get back out there and find a new husband when she was ready.  Jerome in contrast tells her in no uncertain terms that there is not much good one can say about marriage (indeed he says some pretty horrible things about it).  She should therefore rejoice in her single state, and live a life of devotion, denial, and good works.

Detail of a miniature of Jerome as a scribe with the lion at his feet at the beginning of the prologue to Eusebius's Chronicle, London, British Library,Royal MS 14 C.iii, f. 2 (detail)

We know a lot about this manuscript, although as you shall see, there are still some unanswered questions (as is so often the case).  Its prologue says that the text is a translation by the priest, Charles Bonin, and that it was corrected by Jehan Fernaud, described as “a well-dressed blind man and devout religious at the monastery of Saint Sulpice in Bourges.” Nothing further is known about Bonin (or his corrector), and this is the only known copy of his translation.

The Cathedral of St Etienne of Bourges today

We know it was painted by an artist that scholars have dubbed the Master of Spencer 6 (after a manuscript in the Spencer Collection of the New York Public Library), who worked in Bourges, confirmation that it was almost certainly made in Bourges.  The style of the art also helps date the manuscript to the beginning of the sixteenth century, c. 1500-1510.

It begins with a grand full-page frontispiece showing St. Jerome, on the right, giving his letter to a messenger.  On the left we see the messenger handing the letter (which has turned into a book) to Furia.

In his prologue, Charles Bonin addresses a “tres honorée damoiselle,” so we know the translation was made for a woman, a very interesting point, but he unfortunately doesn’t mention her name.  (And note that the coat of arms in the frontispiece, which would have been a good clue to her identity, were left blank.  You can read more about coats of arms in our earlier posts here and here). 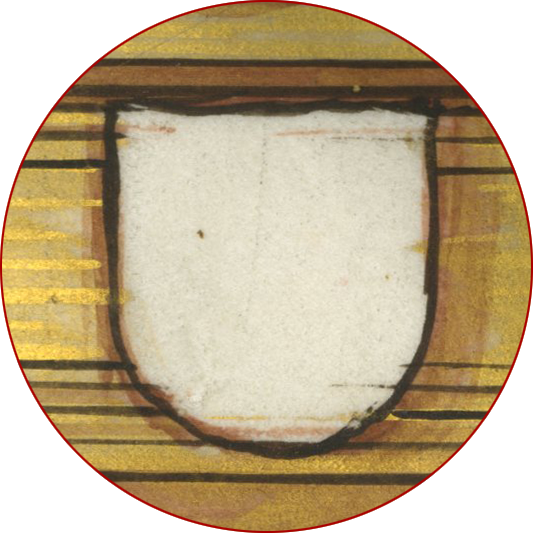 Scholars in recent decades have been eager to learn more about medieval and Renaissance women – especially lay women – and their libraries. This volume, with its serious contents in the vernacular, decorated with a beautiful painting, and copied in a beautiful script, was dedicated to a woman, and likely commissioned by her.  It is one piece of the evidence that shows that wealthy women in Renaissance France were not only well-educated, but were patrons of learning, and collectors of books.

Luckily the story doesn’t end there, since we know one more, very important fact about this manuscript – it was owned by a noble woman, Anne de Polignac (c.1495-1554), quite early in its history.

By lucky chance Anne’s library, which included thirty-six books – a significant collection – was passed down for centuries through the family she married into, and some of the volumes, including this manuscript, can be identified in early inventories.

TM 935, binding.  Our manuscript is still bound in a contemporary binding of purple velvet; many of the books in Anne de Polignac’s library are described as bound in velvet.

Anne owned several Latin volumes including a Bible and Books of Hours, but she obviously was especially fond of texts in French, including a volume now in the Beinecke Library at Yale University, Harangues et oraisons des anciens (Speeches and Orations from Antiquity).

Could our manuscript have been made for Anne? The blank coat of arms suggests perhaps not, and the date means Anne would have been given the book when she was very young.  It isn’t the sort of book most of us owned as children, to be sure, but young children of wealth and stature in the Middle Ages and Renaissance were known to own some pretty serious books.  It remains an open question.

Yale University, Beinecke Library, MS 805, Cicero, On Old Age, copied for Beatrice of Aragon when she was ten.

Anne must have had a personal interest in this text eventually, as she was twice a widow.  She was married first to Charles du Bueil, Count of Sancerre, who died in battle in 1515.  In 1518 she married again, this time to François II de la Rochefoucauld, who died in 1533.  She would not marry again before her death in 1554 in her favorite castle at Verteuil-sur-Charente (near Angoulême), where her library was kept.

The château of Verteuil today.  It has been destroyed and rebuilt many times since the Middle Ages. The castle at Verteuil, as it happens, is also where the famous Unicorn Tapestries (now in the Cloisters Museum in New York City) once hung.  The Unicorn in Captivity (from the Unicorn Tapestries), The Met Cloisters.

You can read more about this manuscript in two catalogues by Les Enluminures, Flowering of Medieval French Literature, and Women in the Book in the Middle Ages and the Renaissance.