The Way of the Warrior: a brief story of Knights and Samurai

A long trip from Western Europe to Japan.

Two regions whose paths crossed only in 1543 when Portuguese traders, the most skilled sailors at that time, arrived, most likely in Tanegashima one of the islands south of Kyushu. Paris and Kyoto, two cities separated by 5,970 miles. Can they have something in common? Hard to say. Culturally they are without any doubt very different. Nonetheless, human societies often tend to shape themselves following similar paths as seems to be the case in this instance. Let’s try to see how and to what degree. Here we go! 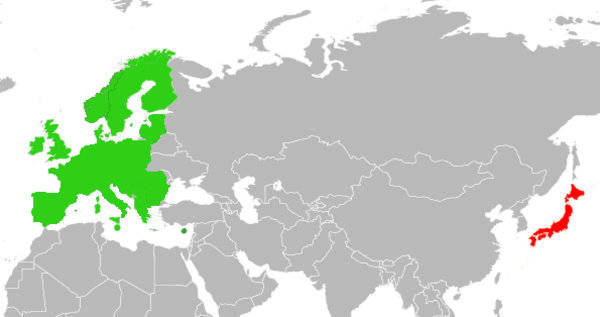 Once upon a time…

Among both the Japanese and European nobles, there was a class of brave warriors that followed a code of virtue, rectitude, and loyalty: these resolute soldiers were known as Knights and Samurai. They travelled, fought and inspired the societies of Europe and Japan for centuries – and still do today as we’ll see later. At first glance they seem very much alike: both knights and samurai were usually members of the upper classes, both were trained in the military arts and both were considered the elites of their militaries: and then a moment arrived when they were simply no longer relevant, disappearing or transforming into a representative/bureaucratic class.

Exactly when the first knights appeared in Western Europe is debated by modern historians - some arguing a knightly class existed as early as the Carolingian era in the ninth century, others tracing its origins to the eleventh century.  Regardless, knights remained crucial characters on the European scene until the sixteenth century, when changes in the art of the war, the army, and the weapons used made them obsolete. 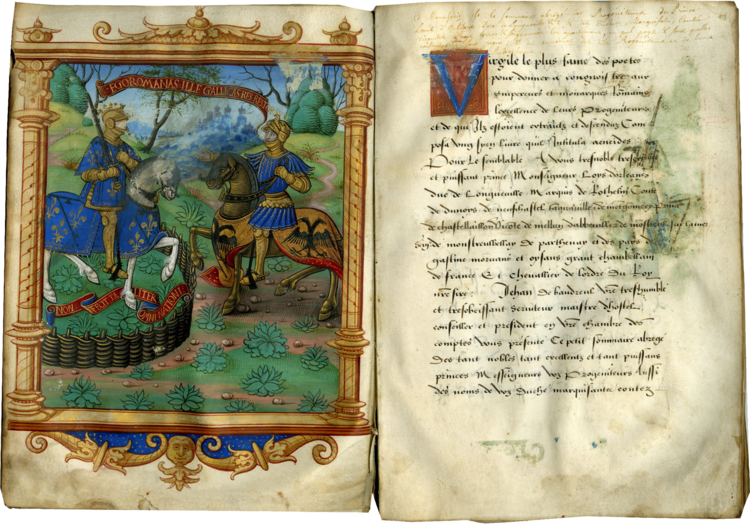 Samurai were members of a caste (the only one allowed to wear two swords, the daishō) created in the eleventh century that lasted officially until 1876 when, being an outdated feudal and military institution, it was abolished. A similar journey indeed, but… 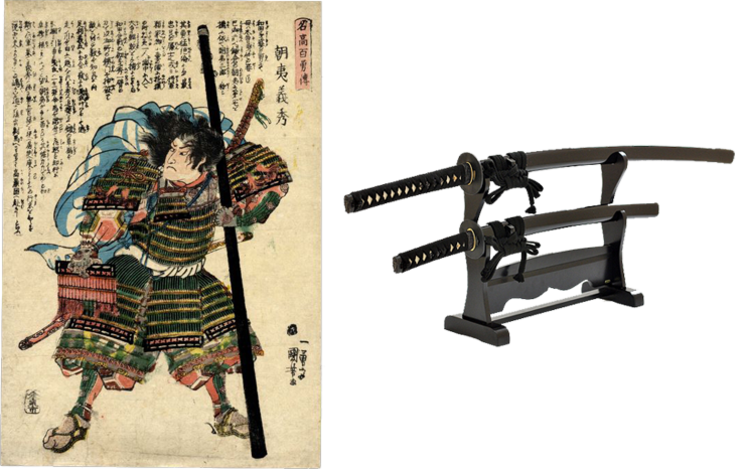 Original Woodblock print by Utagawa Kuniyoshi (1797-1861), "Samurai Asahina Yoshihide" from the series "Stories of the True Loyalty of the Faithful Samurai," Japan, 1843-1844. On the right a "daishō",  the two swords, usually a "katana" (long sword) and a "wakizashi" (short sword).

Once a samurai, forever a samurai.

Here is one of the main differences. Being a samurai was a hereditary status proudly passed from father to son. Very much like the titles of the nobility in Western Europe.  And what about knighthood? Well, unlike samurai, knights had to gain their status, through worthy and virtuous achievements. Who doesn’t know at least the name of one legendary knight always wandering around the countryside trying to make a name for himself, looking for a damsel in distress, a dragon to kill, or perhaps even the Holy Grail! 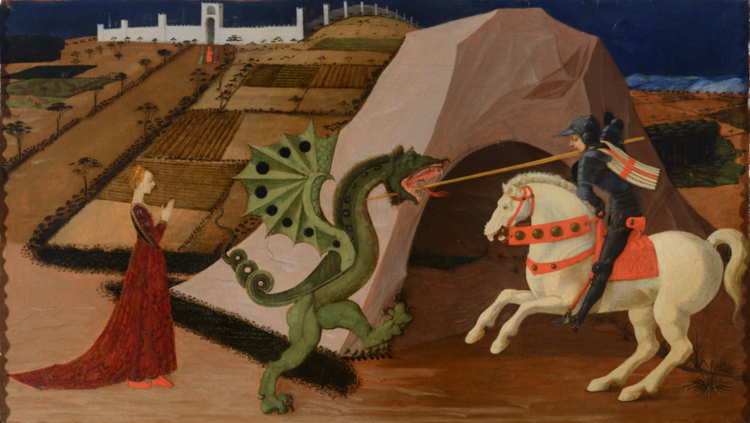 Paolo Uccello, Saint George and the Dragon, 1430-35, Musée Jacquemart-André. A holy knight, a dragon and a damsel: all the main characters are united here.

And if no dragon was available at that moment? Have no fear. Testing his jousting skills in a tournament was another chance to prove himself. The last folios of TM 627 (part of our successful program Manuscripts in the Curriculum) report the names and arms of the knights present at a tournament that took place in Dunstable, England in the month of March 1308. This specific Dunstable tournament is important since it is the oldest surviving English Tournament Roll of Arms giving details of all 289 combatants: including their names and coats of arms. 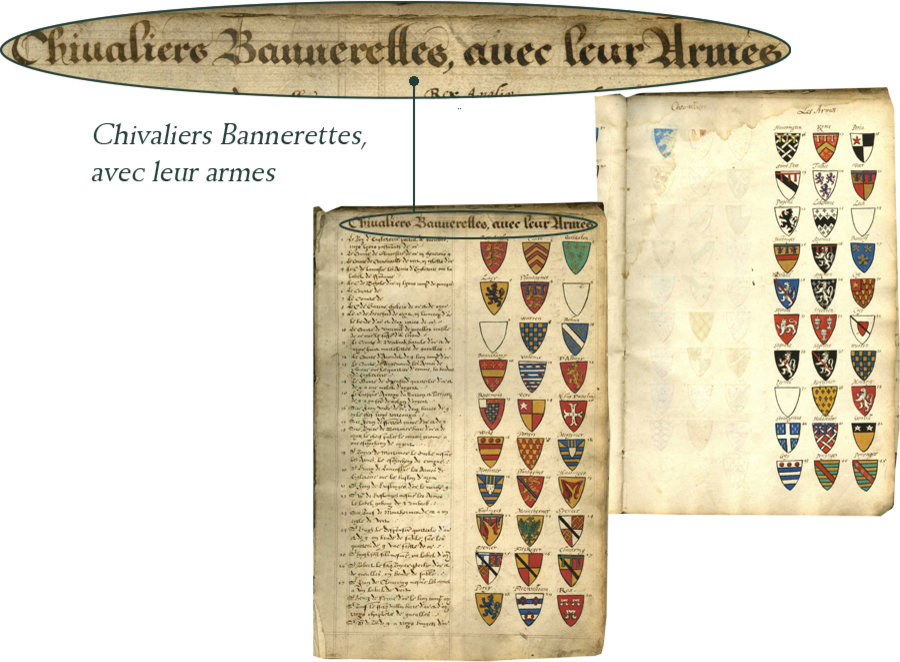 TM 627, Rolls of Arms, The Genealogie Royall and Lineall Discent of all the Kinges and Queenes of England; followed by other Rolls of Arms, including the Dunstable [Stepney?] Roll of 1308 and others, England, necessarily after 1558 but prior to 1603, c. 1590-1600.

Knights also featured prominently in medieval fiction, which celebrated their prowess in battle against the Saracens. The manuscript below (formerly Les Enluminures and recently acquired by the city of Metz), a copy of the medieval Chanson de Geste de Garin le Loherain, tells the story of an epic hero Garin “the Lotharingian” that takes place in the very heartland of the Franco-German Empire at the height of its power.

Nobility was inherited, knighthood was earned. 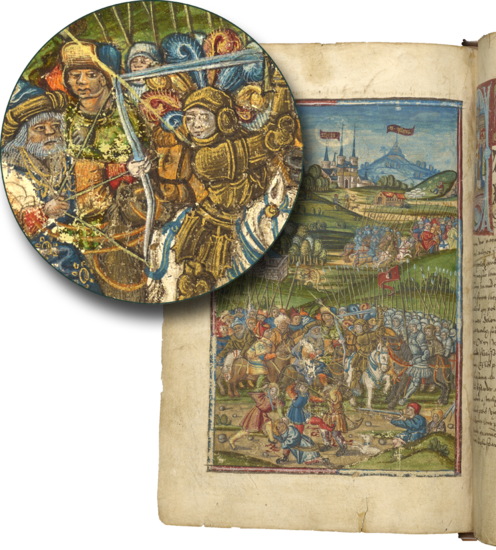 With great power comes great responsibilities. Loyalty above everything!

For Samurai being loyal towards their daimyo - the Japanese equivalent of a Western feudal lord - was everything. The first and last duty. They were bound to their lord and their community, fighting and dying for them. Being (or becoming) “masterless,” a rōnin, was a veritable disgrace: an honorable death was a better outcome than a shameful life as the story “The forty-seven rōnin” teaches us. Left without their master, who was forced to commit suicide after a dispute with another noble, they decided to avenge him by killing the rival. Found guilty, the forty-seven warriors were however allowed an honorable death, thus becoming important emblems of loyalty and sacrifice. This strong sense of honor and duty deeply permeates the Japanese society even today. 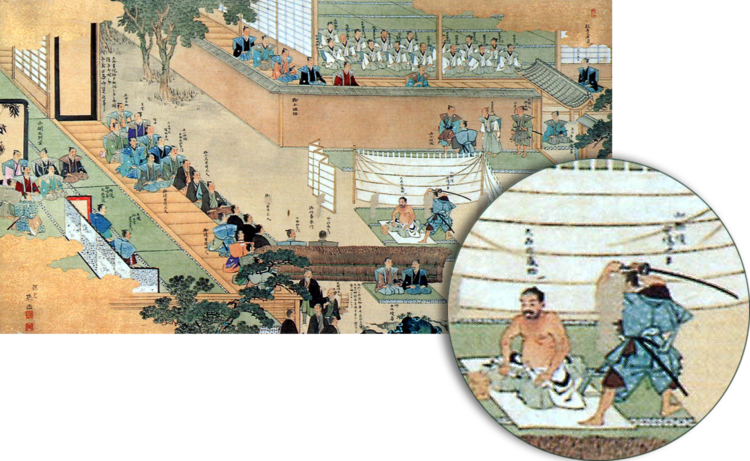 Duties and responsibilities were of course no strangers to knights but in a somewhat different way. They had to learn how to fight, swear oaths of allegiances, always conduct themselves in a virtuous and courteous way, protecting the weak and fighting for their lord in the name of God. At least that’s the ideal of knighthood and chivalry, well exemplified in the works of Chrétien de Troyes, by knights like Sir Lancelot for example. 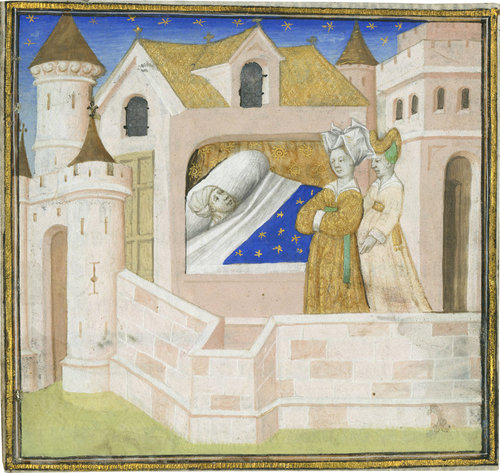 And let’s not forget that being a knight-errant, a rōnin, was no shame at all!

In the name of God but for the glory of the King.

Indeed. Christianity had a prominent role in the chivalric code during the Middle Ages. From kings to peasants, everyone had to bow to the power of God. And of course, a knight had to live and behave following the dictates of his religion. However, the same kings that formally bowed to God, tried more pragmatically to ensure that their knights would serve them and no one else.

Here is one example. The Order of Saint Michel was founded by King Louis XI of France in 1469: royal chivalric orders like this one were created in Western Christendom during the 14th-15th centuries to assure the loyalty of the knights to the king by serving as an ingenious supplement to the feudo-vassalic ties. The chapters of the statutes evoke the chivalric life of its members, specifying the number of knights, the qualifications for membership, the prohibition to go to war or travel abroad without the king’s permission, what would happen if knights found themselves at war against each other, ceremonies to be performed when the knights assembled in the king’s presence, festivals celebrated, elections, oaths, and so on. 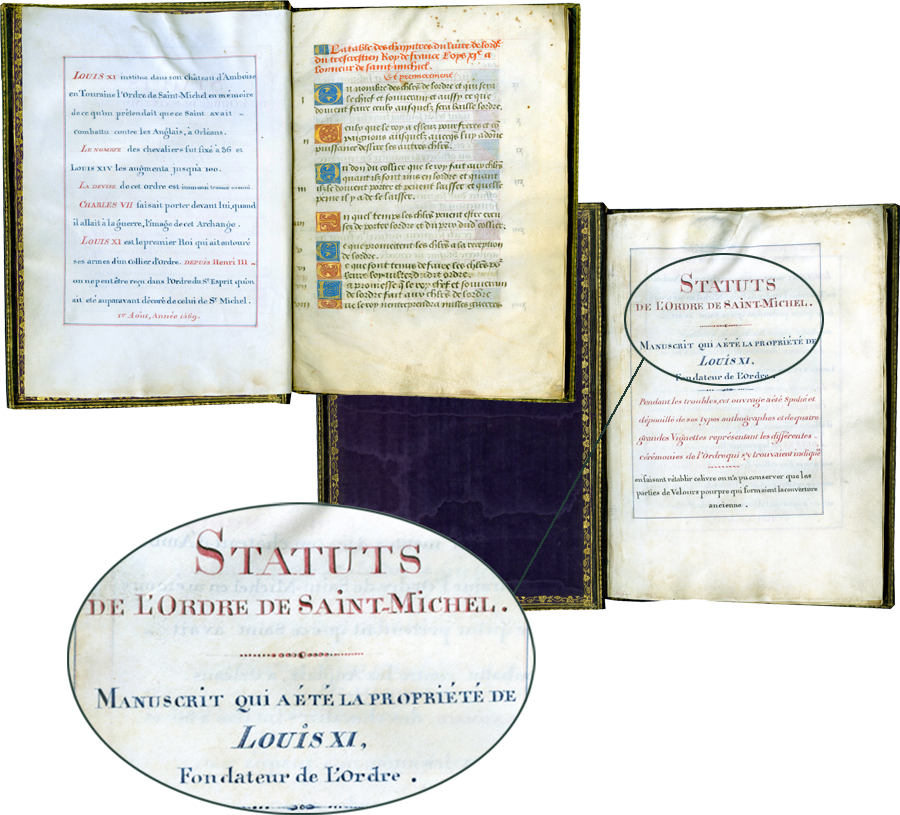 On the other hand, a samurai followed nothing but a code of honor and integrity, better known as bushido. And God had no part in it. Influenced by numerous religions (Shintoism, Confucianism, Buddhism), it was a non-written code of moral principles. No need to define practices and rules when everyone knows and follows them.

Something that every hero in every country and time wanted to achieve. And rightfully so! Men like Musashi Miyamoto, considered the greatest swordsman in Japan and author of The Book of Five Rings. Or Kusunoki Masashige a brilliant tactician, who consciously found death following the absurd orders of his emperor.

On the left: statue of Kusunoki Masashige outside Tokyo's Imperial Palace. On the right: Miyamoto Musashi stepping on the head of a “yamazame” (crocodile-like creature), woodblock print by Utagawa Kuniyoshi, The British Museum, #2008,3037.15803 (detail).

Undeniably Europe too has had its champions: Bertrand du Guesclin for instance, who became famous winning tournaments like the one in Dunstable, fought bravely during the Hundred Years War, and now rests in the Basilica of Saint Denis outside Paris. Or Jean II Le Maingre, known as Boucicaut, the embodiment of chivalry.

The legends walk among us.

We have come a long way and barely scratched the surface of a topic that would require more consideration. Alas! Time (and space!) is running out. Still, if we are here in 2020 talking about knights and samurai, chivalry and bushido, it is because they still live (and no, I’m not talking about the heirs of those noble men).

From books to movies to animation and to comics, they even now influence our society. Isn’t Game of Thrones full of honorable (or not?) knights, damsels and dragons? Yes of course! People love dragons.

Isn’t Akira Kurosawa one of the greatest Japanese directors? And what is he well-known for? Samurai movies. 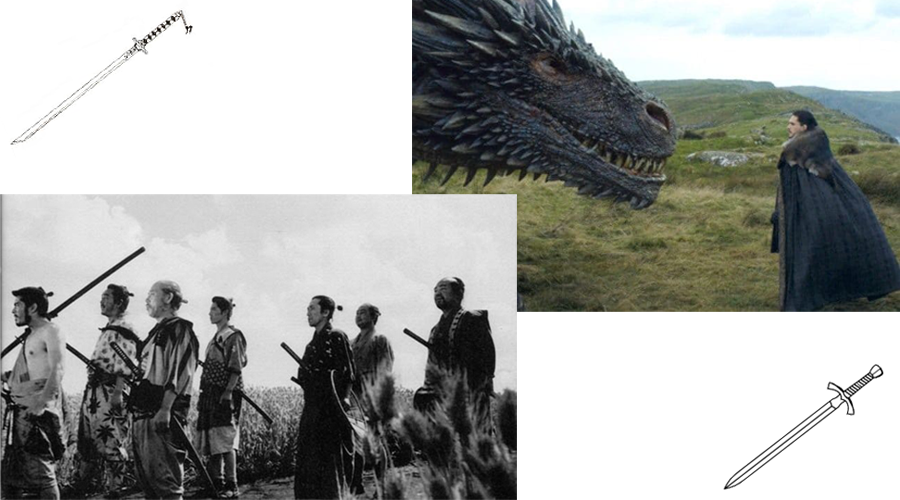 Scenes from Seven Samurai” by Akira Kurosawa and “Game of Thrones.”

The same goes for animation and comics.  With more than forty million copies sold, Berserk has been – and is – one of the most acclaimed Japanese comics all over the world: Kentaro Miura started drawing it 1989 and the end seems far away. Or Yoroiden Samurai Torupa (“Ronin Samurai” in English), a Japanese anime, which was produced at the end of the 80s and aired on American television during the summer of 1995. 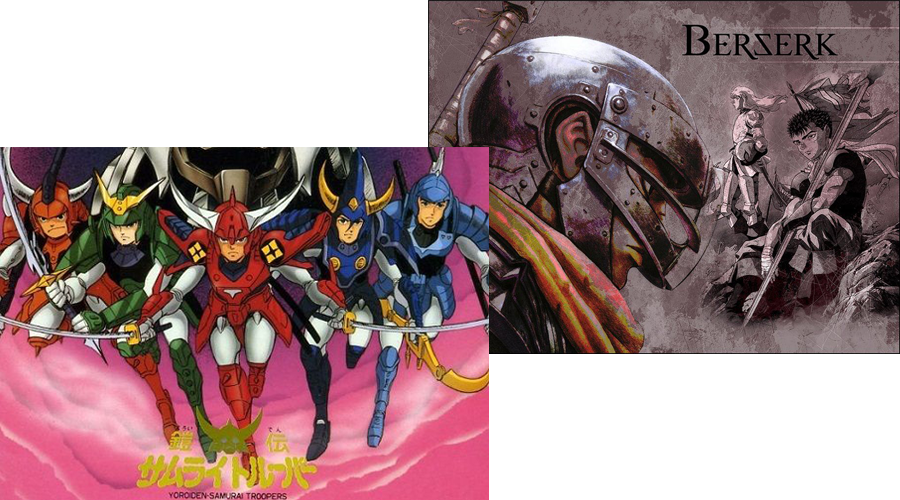 On the left “Yoroiden Samurai Torupa” also known as “Ronin Samurai”. On the right “Berserk.”

A Knight’s Tale, Ivanhoe, Robin Hood, The Last Samurai, Sanjuro, Seven Samurai; these are just a few epic movie titles, both from Hollywood and Japan, featuring our champions…  Perhaps, in a way, they did find what they were looking for: everlasting glory!

Of Dames, of Knights, of armes, of loves delight,
Of courtesies, of high attempts I speake,
Then when the Moores transported all their might
On Africke seas, the force of France to breake
(Orlando Furioso, by Ludovico Ariosto translated by Sir John Harington) 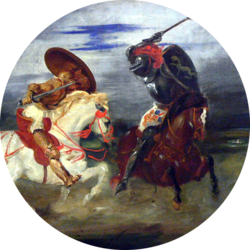