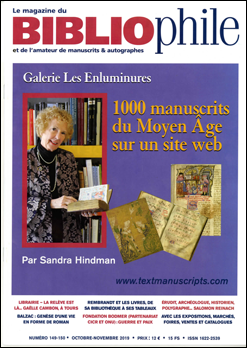 The online site run by Les Enluminures and dedicated to the description and sale of text manuscripts www.textmanuscripts.com was launched in September 2002. The historic moment of the offering of TM 1000 represents a remarkable achievement that prompts a review of a few highlights from the sales of the past seventeen years. 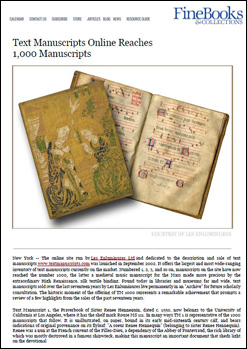 The online site run by Les Enluminures Ltd and dedicated to the description and sale of text manuscripts www.textmanuscripts.com was launched in September 2002. It offers the largest and most wide-ranging inventory of text manuscripts currently on the market. Numbered 1, 2, 3, and so on, manuscripts on the site have now reached the number 1000... 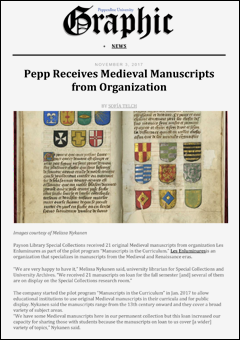 Manuscripts in the Curriculum at Pepperdine 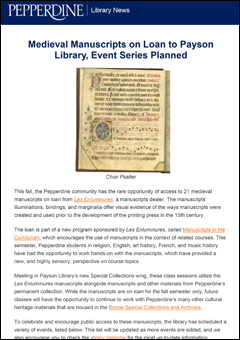 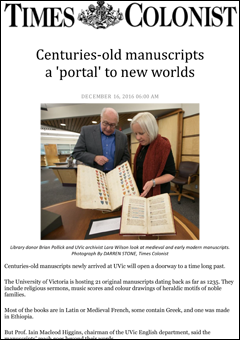 The medieval manuscripts can likewise act as a “portal” or “doorway,” Macleod Higgins said, transporting students to a time when all books were hand-printed by scribes and human knowledge, at least in the West, was just being set down.
The article featured in the "Times Colonist" presents the new Les Enluminures program: Manuscripts in the Curriculum. It enables colleges, universities, and other educational institutions in North America to borrow a select group of original manuscripts of a very wide range dating from the thirteenth century onwards to be used for teaching. 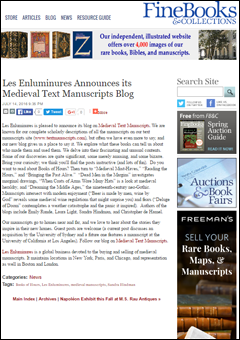 Les Enluminures announces its blog on Medieval Text Manuscripts. We are known for our complete scholarly descriptions of all the manuscripts on our text manuscripts site (www.textmanuscripts.com), but often we have even more to say, and our new blog gives us a place to say it. 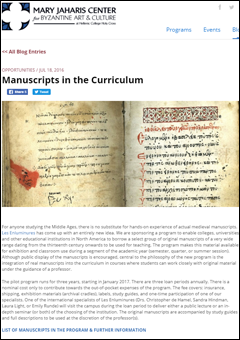 For anyone studying the Middle Ages, there is no substitute for hands-on experience of actual medievalmanuscripts. Les Enluminures has come up with an entirely new idea sponsoring a program to enable colleges, universities, and other educational institutions in North America to borrow a select group of original manuscripts of a very wide range dating from the thirteenth century onwards to be used for teaching. 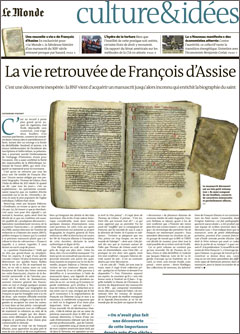 Le Monde announces the BnF’s purchase of an important thirteenth-century Franciscan Miscellany from Les Enluminures. This hitherto unknown life of St. Francis is of the utmost importance and will surely yield critical new insights into the early history of the order and the earliest lives of the saint. 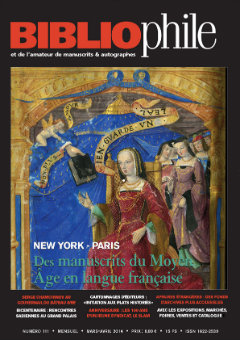 On the May issue of the Magazine du Bibliophile, Sandra Hindman discusses the spectacular and extraordinarily rare manuscripts featured in the Les Enluminures exhibition “Flowering of Medieval French Literature”; all of which written in French between c. 1325 and 1550.

The Italian humanists were fascinated by this collection of fictional letters by the monstrous Sicilian tyrant, Phalaris, famous for torturing his enemies inside a bronze bull and eating human babies. In keeping with the established tradition in Ancient Greece of epistolary fiction, these letters are a literary creation by a yet unknown author.
View Video

Ethiopian manuscripts are remarkable products of a living scribal culture that has survived from Antiquity until today. Their bindings often preserve structures similar to early Christian books from the fourth to the seventh centuries.
View Video

Widely read by the Italian humanists of the fifteenth century, this short history of Rome affirms the humanist desire to resurrect a glorified Roman past.
View Video

An exquisite piece of Elizabethan penmanship and artistry in almost pristine condition. The Order of the Garter, founded in 1348, is one of the oldest Chivalric Orders in Europe.
View Video

Noteworthy for its careful script and illuminated miniatures and initials, this securely localized Prayer Book contains a rich collection of texts that illustrate personal devotion at the end of the Middle Ages, and evidence of active for a century.
View Video

1. TM 1139: One sheet, and a small portion of the following one, from the beginning of a popular universal chronicle, once part of a long illustrated scroll, of which other fragments are known in public and private collections. 2. TM 1064: This one, a genealogical roll of arms or pedigree scroll, is modeled on genealogical rolls of the late medieval kings of England and represents a type that functioned as an important record of a family’s status, asserting and affirming the family’s identity over time. 3. TM 1082: A fascinating window into the practicalities of marriage in early modern France, this roll records in considerable detail the exchange of property – dresses and clothes, jewelery and silvery, and land – that that took place to enable the marriage of a French noble couple.
View Video

Many Processionals were made for the use of nuns. Those from the convent of St.-Louis at Poissy, home to sisters of royalty and the author Christine de Pizan, are among the best known. This example is fascinating.
View Video

Medical manuscripts are rare; those in uncommon vernaculars are even more scarce. The present volume includes a Catalan translation of selected texts from the Ars Medicinae -- including a synthesis of essential works by Galen.
View Video

Books composed with stencils occupy an interesting, and relatively unstudied, mid-ground between manuscripts and printing with movable type. This is a curious example, and one that has the added advantage of including richly illuminated initials.
View Video

Although tiny and compact like many miscellanies used by the mendicant friars, this manuscript was an expensive production.
View Video

Owned by a woman of the French aristocracy, Anne de Polignac, this deluxe, carefully fashioned manuscript presents a unique copy of a French translation by a hitherto unknown translator of Saint Jerome’s letter to the widow Furia.
View Video

The text in this manuscript, one of the most important confessional manuals of the Middle Ages, is here condensed into a convenient and practical guide for the instruction of inexperienced confessors.
View Video

Relatively large in format, this carefully written and decorated liturgical manuscript from the important church of St. Kunibert in Cologne was used daily by the canons for the liturgy associated with death and burial.
View Video

The Horologium sapientiae by the Dominican mystic Henricus Suso was one of the most popular devotional texts of the later Middle Ages. Its emphasis on the Passion of Christ and its critique of the failings of the contemporary Church explains its appeal with both clerics and lay men and women associated with the Devotio moderna.
View Video

This manuscript unites four copies of printed, though rare, Protestant texts: a devotional work on the Eucharist with a Prayerbook, a historical work on the origins of the confessional conflict accompanied by Martin Luther’s sermon for Good Friday 1522, a German translation of a Eucharistic treatise by the Carolingian theologian Ratramnus of Corbie, and a guide to reading the Bible during the calendar year.
View Video

Attractively written manuscript in pocket format and with clean wide margins of Saint Jerome’s lives of Paul, Malchus, and Hilarion, writings of considerable narrative charm which exercised an enormous impact on later hagiographic literature and which continued to be widely read throughout the Middle Ages and into the Renaissance.
View Video

This small volume is the personal Prayer Book of an individual nun, a member of a convent in eastern Swabia and shows evidence of intensive reading by the nun at prayer.
View Video

This modern Antiphonal was carefully copied, and includes the same square notation on four-line staves found in medieval music manuscripts since the thirteenth century.
View Video

This stately volume, with large accomplished script and decorated red initials, is an unstudied addition to a group of North Italian copies of an influential treatise on the monastic life by a twelfth-century author
View Video

This grand humanist copy of the Letters of Saint Jerome once belonging to Bernardo Bembo (1433-1519), a Venetian nobleman, important humanist, and envoy to the court of Lorenzo de’ Medici with marginal notes and maniculae in his own hand.
View Video

Slightly smaller than a modern paperback, this handy little reference book – a kind of antecedent to Roget’s Thesaurus – includes distinctions between words of similar meanings or synonyms.
View Video 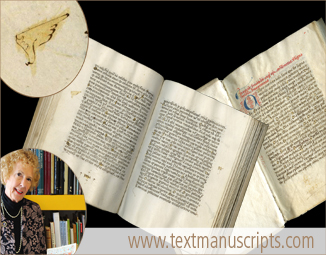 This small-format miscellany contains texts to nourish the religious life, both practically and spiritually. The Sermons to the Brothers in the Desert (attributed to Augustine, but composed many centuries after his death), and the Soliloquy by St. Bonaventure were medieval bestsellers.
View Video

The Singer and the Scholar

On the occasion of "The Singer and the Scholar" concert held at Les Enluminures, New York on 6th Feb 2014, Anne Azéma (Director of the Boston Camerata) sings from a selection of medieval manuscripts on display in the "Sacred Song" exhibition (January 24th- February 21st 2014)
View Video 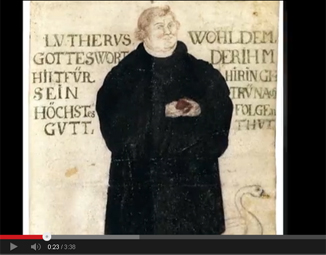 Dr Sandra Hindman discusses highlights from the exhibition, "Paths to Reform: Things New and Old," including texts associated with the "Devotio Moderna", a rare near-miniature New Testament in its original red leather binding, and an illuminated page of Luther and the swan.
View Video

Dr. Sandra Hindman presents the website textmanuscripts.com, which highlights a selection of text manuscripts from the Middle Ages and Renaissance offered for sale by Les Enluminures. Each manuscript has an interesting or unusual text and many are illuminated.
View Video