Horse Horoscopes and Other Wisdom from Medieval Veterinary Science

Humans have always had a special relationship with horses. In practical terms, horses have provided the brawn to build human societies, the swiftness to travel, and the courage to wage wars. But there is something more. 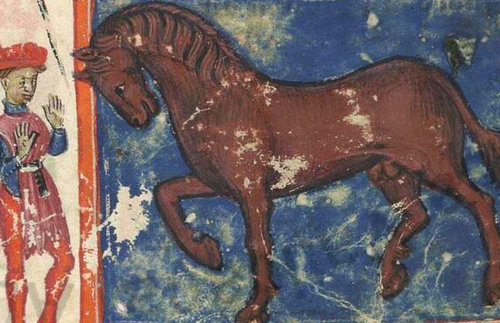 Horses are deeply intelligent creatures with complex emotional lives that often mirror our own. “No philosophers so thoroughly comprehend us as horses” wrote Herman Melville. We may no longer require “horsepower” in our daily lives, yet we retain an ongoing fascination with horses, be it star athletes like Triple-Crown winner Justify or movie characters like Maximus from Tangled.

Justify at the Belmont Stakes, 2018 and Maximus from Disney’s Tangled, 2010

Our longstanding relationship with horses has also created the need for veterinary medicine. This ancient art is nearly as old as human medicine and was often practiced in tandem. Veterinary treatises were created in many parts of the ancient world; some of the earliest records come from China and Greece dating to the third century BCE. In China, veterinary medicine became formalized in the early Tang Dynasty (7th century CE). Horses were prized, and myths circulated of “celestial steeds” that “sweated blood” and were actually dragons in disguise. 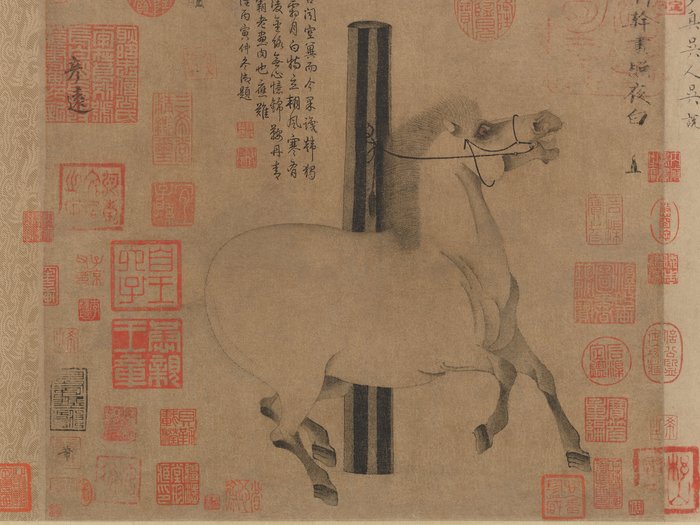 In Europe, Greek physicians composed a corpus of writings that became known as the Hippiatrica, which was translated into many languages and circulated as far east as India. 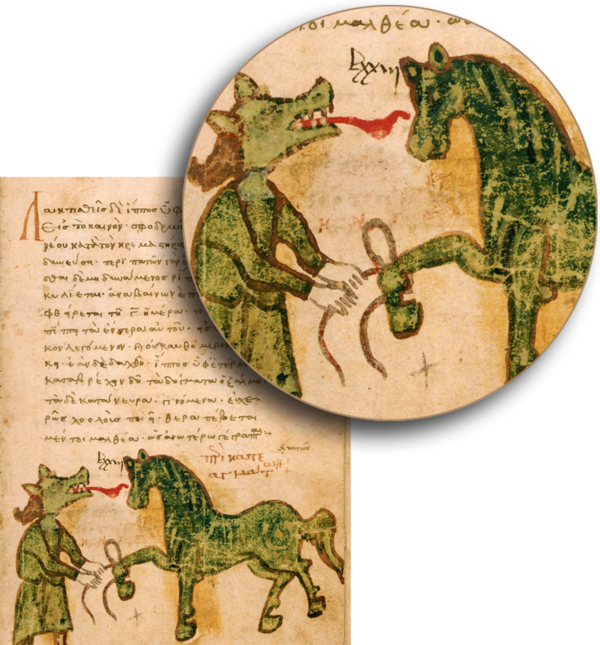 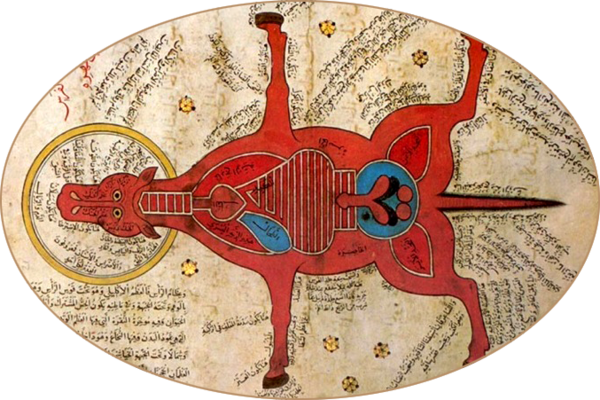 Medieval veterinary medicine inherited the Hippiatrica and added its own flare, much of which is truly bizarre. Bloodletting, astrology, and salves made from bacon are but a few of the offerings found in the Hippiatria sive Marescalia (Book of Horse Health) written in the early fourteenth century by Lorenzo Rusio (1288-1347). 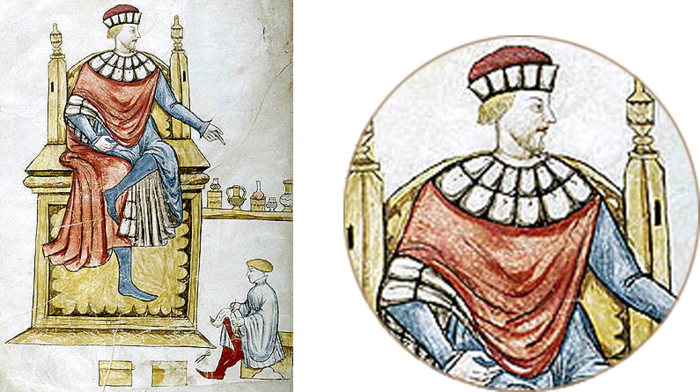 Rusio was a prestigious farrier who worked in the stables of Cardinal Napoleone Orsini (1260-1342), the brother of Pope Nicholas III. His treatise was a blend of old and new incorporating “cutting edge” medical theory with traditional practice and personal observation. His first-hand knowledge of veterinary medicine is made clear in his accurate descriptions of symptoms and pathologies, especially foot diseases and injuries caused by bridles and other restraint systems. He also empathically describes a devastating epidemic in Rome in 1301 that killed more than 1,000 horses.

Rusio’s treatise was extremely popular and quickly translated from Latin into Italian and other vernaculars, such as this copy that dates to 1434 and was owned by a ducal farrier at the court of Nicccolo III d’Este, the Marquis of Ferrara (1383-1441). 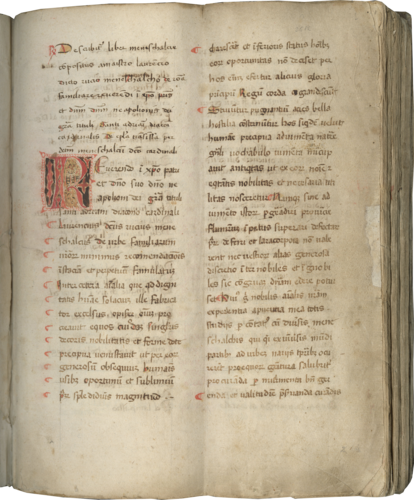 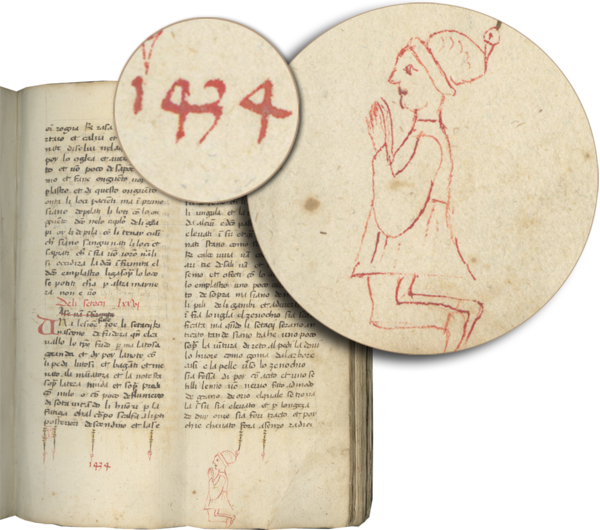 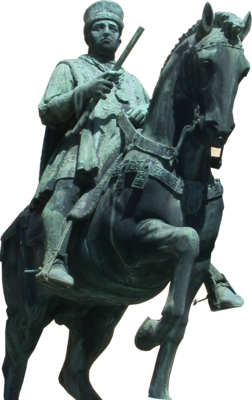 The manuscript’s hardy, wallet-style binding indicates that the owner used this book practically, carrying it with him as he attended the duke’s stables. 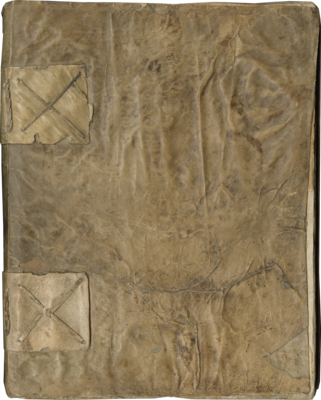 Practical copies of Rusio’s treatises such as this seldom survive and provide rare insight into the actual practice of medieval equine medicine. The owner added many of his own notations as well as a list of useful medicinal recipes in the back. 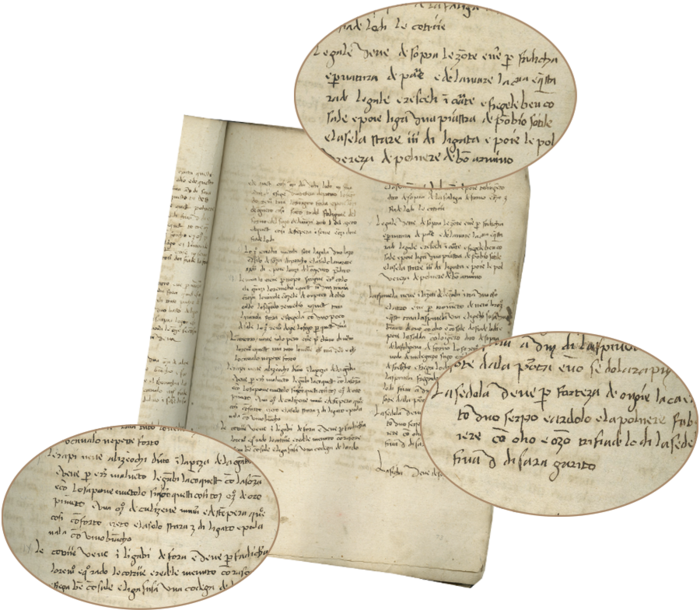 Seven charming drawings are also included in the margins, including grotesques, a dog drinking at a fountain, and Saint Eloy, patron of farriers and blacksmiths. While Rusio’s treatise was considered to be of the highest quality, it still didn’t hurt to invoke saintly specialists. 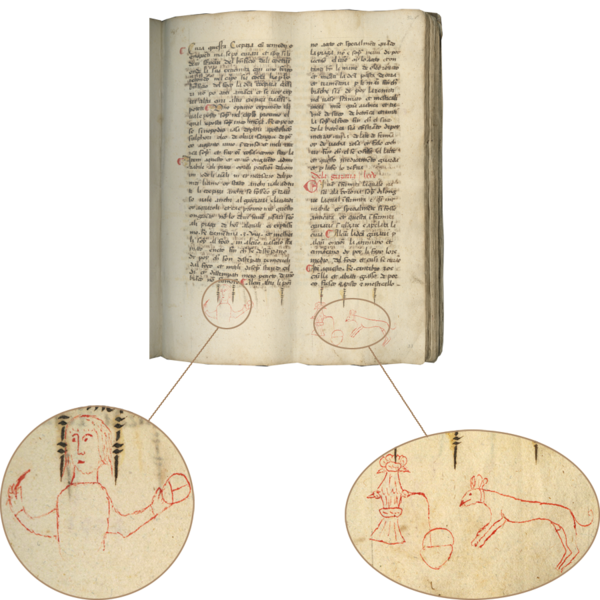 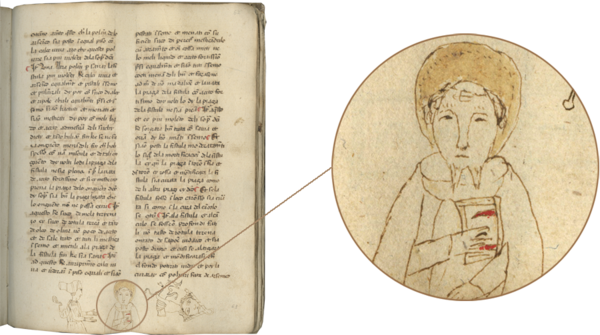 Much of Rusio’s text provides sensible advice concerning diet and general equine wellness. Considerable attention is given to how fat horses should be (very fat!), including a whole chapter on how to fatten horses “who eat well, but never seem to gain any weight.” However, Rusio does note that such measures can go overboard and devotes the next chapter to equine dieting: a strict regimen of millet flour mixed with warm water. 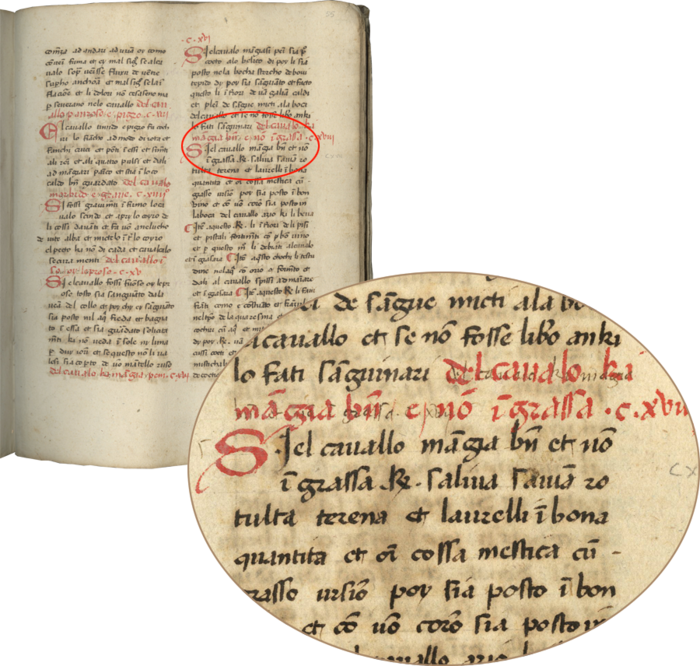 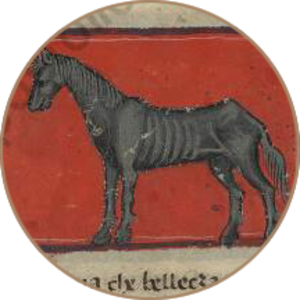 Other aspects of the treatise are far stranger and incorporate the latest medical theories taught at medieval universities. Five chapters are devoted to bloodletting, a practice that was believed to purge the body of a “superabundance” of blood, responsible for many maladies. In horses, the signs include (among other things), bloodshot eyes, foul excrement, and obsessive rubbing against trees and fence posts. 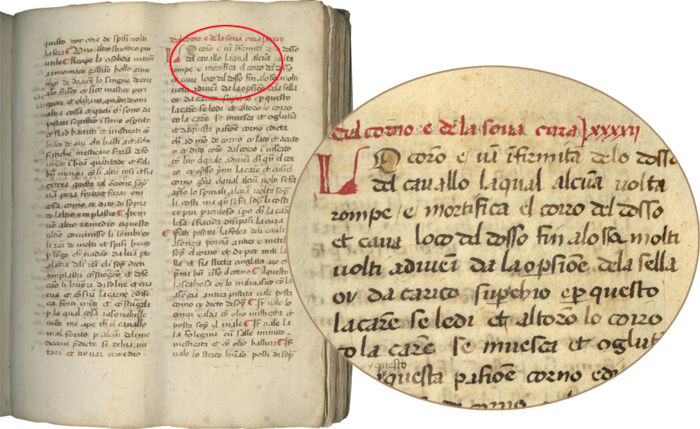 A number of veins were recognized for bleeding, as pictured in a copy of Rusio’s Marescalia in the Morgan Library. “Letting” removed the excess of blood and encouraged a healthier, happier horse (although descriptions of the harnesses used to restrain the horse suggest otherwise). 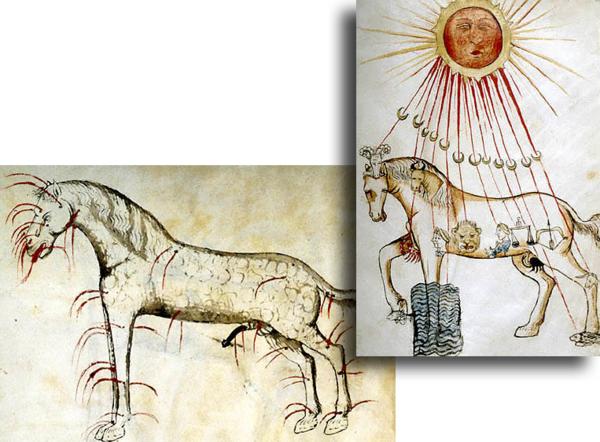 Rusio does note that bleeding could be potentially dangerous if too much blood was removed. For this reason, it was best to avoid certain astrological conditions. Because bodies were believed to be influenced by the signs of the zodiac, bleeding and surgery were dangerous in certain months. A horse’s shoulders, for instance, were governed by Taurus; therefore, bleeding of the shoulder area should be suspended for the month of May when Taurus was ascendant. The chart above from the Morgan manuscript provides an overview of each sign and its relationship to the body.

These practices were borrowed directly from the prevailing medical theories for humans, which also prescribed bloodletting coordinated with astrological calculations. Similar charts are common in medical treatises and even books of hours well into the sixteenth century. The perceived similarities between the human and the equine body were so strong that many renaissance physicians labeled the horse the “mirror of man.” 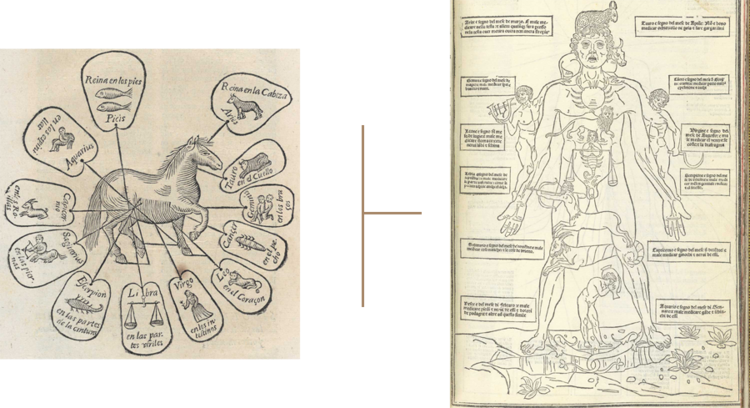 While Rusio doesn’t directly note the connection between human and equine medicine, he does consider other ways a horse might reflect its owner. Much of Rusio’s treatise deals with breeding and the selection of stallions because a noble lord required a noble steed. Breed was therefore important so that a lord would not be mistaken for a villain riding an ugly horse with a squat neck, bowed legs, and a monstrous chin. 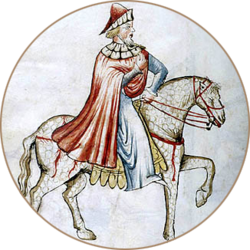 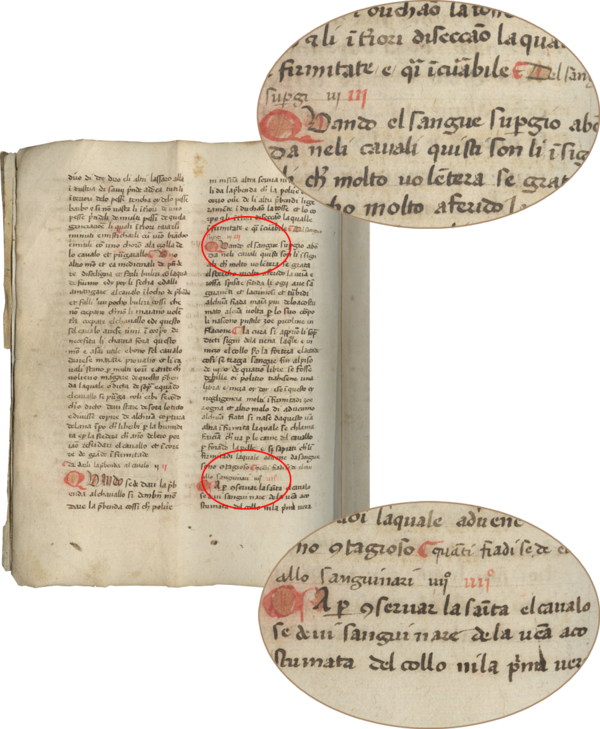 Rusio advises that stallions and mares should be selected for breeding through a strict criteria, highlighting especially long legs, full, bushy manes, and large, expressive eyes. Mares, Rusio noted (incorrectly), are nearly always ovulating whereas stallions require some level of conditioning. A stallion should be confined and rested for several days so that “his seed is strong” and then released into a pasture with the preselected mare. Horse breeding is best done in the Autumn, Rusio observes, when temperatures are mild and pastures abundant. 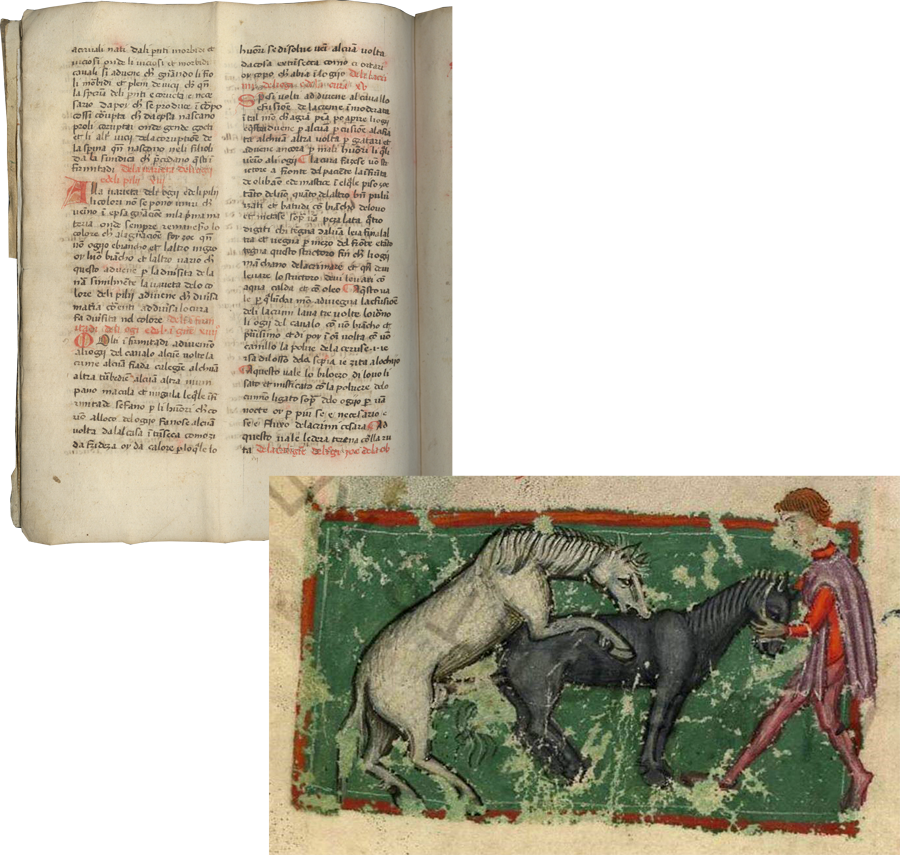 Rusio’s ten chapters on breeding remind us of the lineage of this activity. The famed Vienna Lipizzaner for instance all trace their ancestry to a sixteenth-century stud farm near the village of Lipica (“Lipizza” in Italian) in modern-day Slovenia. 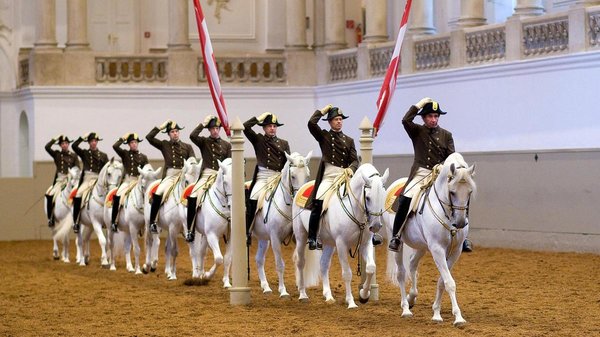 Other elements from Rusio’s treatise also carry over to today. Horse breeds for example are often still described by “temperament.” “Hot blooded” horses are said to be nervous and energetic, “cold blooded” are calm and enduring, and “warm blooded” a mixture of each. These modern designations descend directly from Rusio and his contemporaries. He cites for instance the size and speed of the horse as indicative of its “hotblooded” temperament, while calmer, “coldblooded” horses are distinguished by their submissiveness to their master, “or to anyone who feeds them.”

So, while many of the Rusio’s theories seem completely alien to us today, others live on. Most of all, Rusio’s empathetic observations on horses and often humorous commentary on their behavior ring true to anyone caring for a horse, cheering at a race, or enjoying a ride.