The Dos and Don’ts of Medieval Heraldry

Detail from a miniature cut from a copy of the Livre du Lancelot de Lac, with rich illuminations that have been attributed to the Dunois Master (possibly Jean Haincelin), France, Paris, c. 1440-1450

If called upon to imagine a medieval knight, odds are most of us picture someone looking a bit like the knights in this detail from an Arthurian miniature, clad in armor, helmeted, swords drawn for battle.  With their visors mostly down, these knights are practically encased in their battle gear.

Now take another look, this time at the full miniature (see below).  If you had to distinguish these figures, pick one knight out from the fray, how would you do it?  This being a picture, you could simply specify “knight on the far left” and make your selection clear, but if you were actually witnessing this medieval melee and that knight was not obligingly maintaining his position on the far left, his only distinguishing feature would be his blue and gold shield, which would be blazoned (that is, described formally in heraldic language) as azure, a chevron or (blue, with a gold chevron). 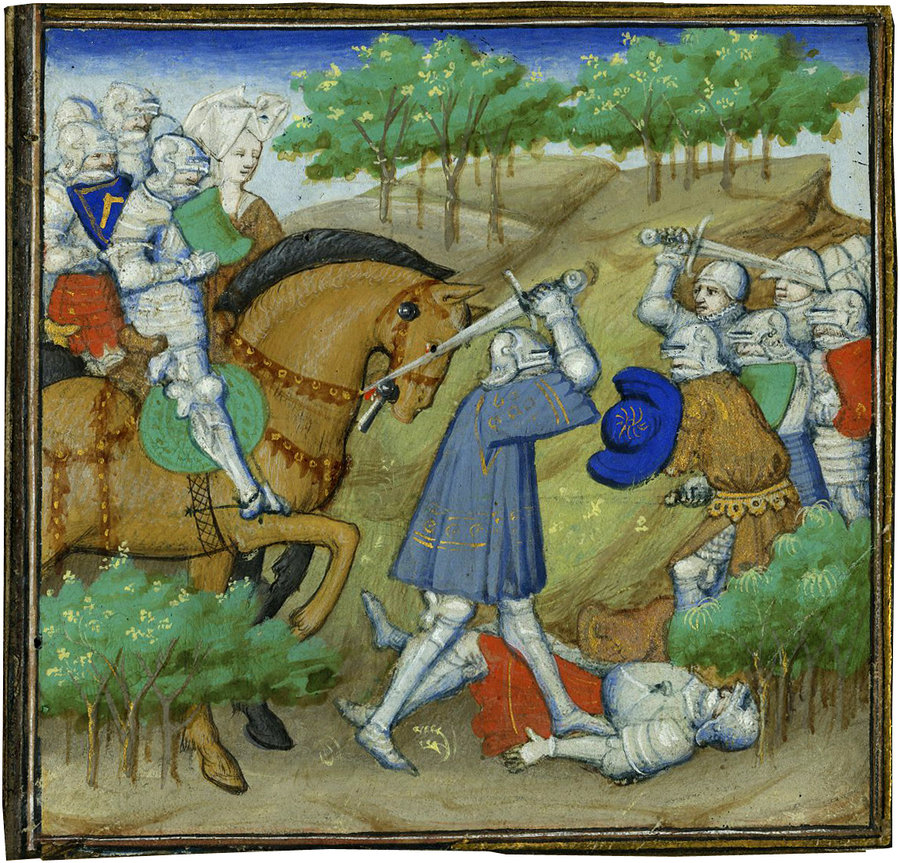 This miniature, shown here in full, depicts Gawain and nine companions in search of Lancelot

People adopted personal or corporate emblems long before the Middle Ages, but the systematic use of colored devices on shields to identify knights grew out of the need to make them recognizable in battles and tournaments, where their armor rendered them virtually anonymous otherwise.  In fact, medieval Arthurian romances are full of scenarios in which knights can go incognito or falsify their identities simply by swapping the shields bearing their own heraldic arms with others. 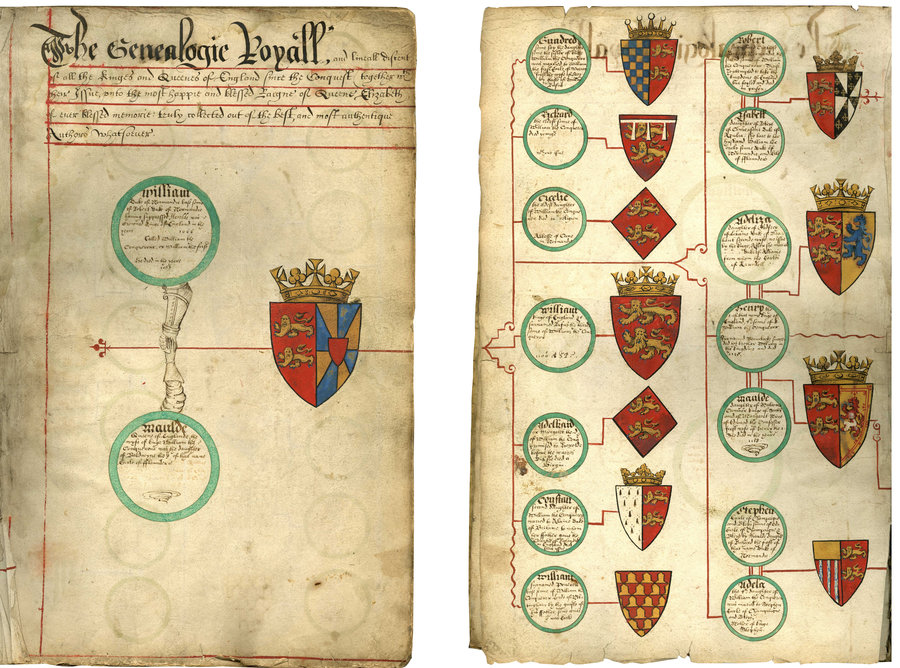 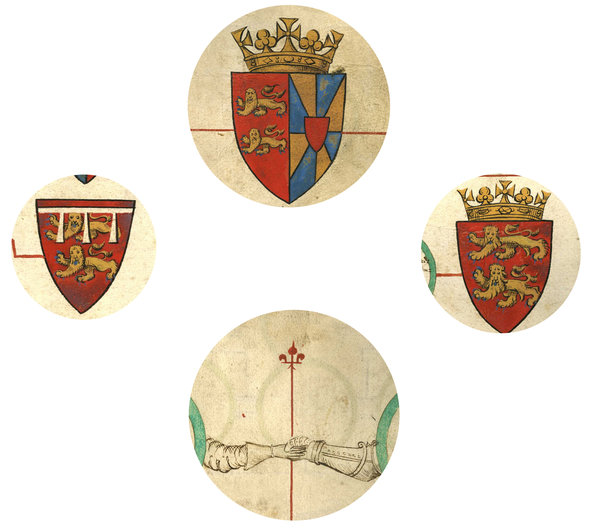 As codified in the late Middle Ages, heraldry was restricted to those who had earned the right to bear arms.  It was also hereditary: once a man had a coat of arms, he could pass it on in some form to his children, a practice you can see illustrated in the Tudor roll of arms above.  And it also carried legal weight: one’s heraldic device could be used in one’s official seal, for example.  As such, it was carefully regulated by officers of arms, and it continues to be regulated in different countries to this day. 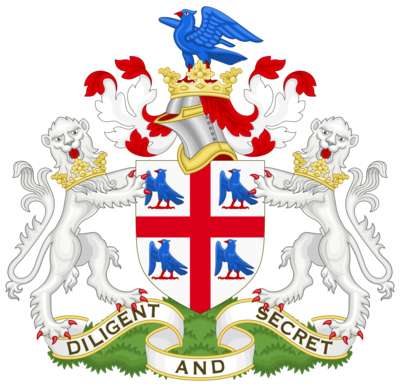 The coat of arms of one of these regulatory bodies, the College of Arms, official heraldic authority for England, Wales, Northern Ireland, and much of the Commonwealth

This regulation extends even to the components of heraldic arms, as attested by the Traité du blason, written by the fifteenth-century heraldist, Clément Prinsault.  One of the earliest heraldic treatises, the Traité carefully breaks down the various components of a coat of arms and describes how to blazon them.  In other words, if you’re new to heraldry, this handbook makes for an instructive read – and often a very interesting one! 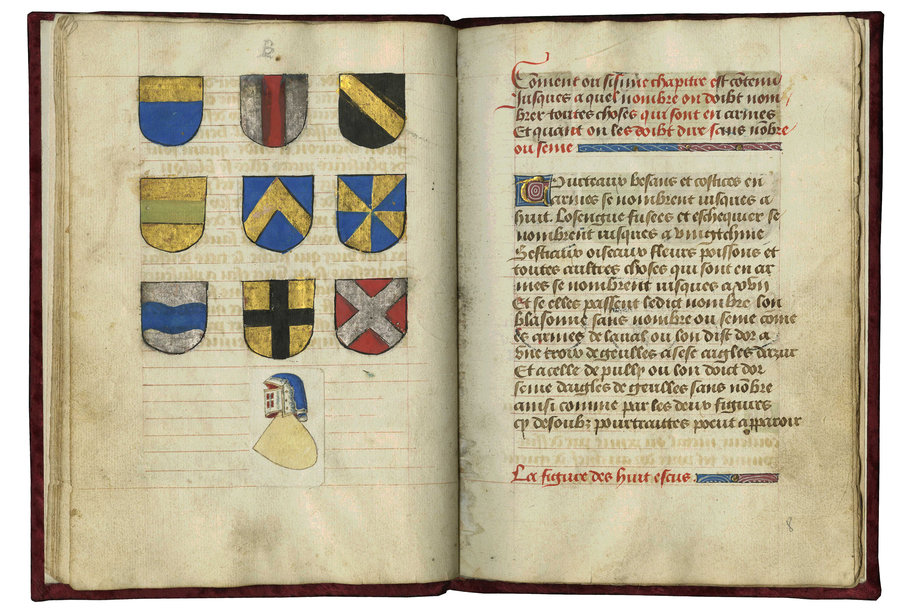 Particularly noteworthy are Prinsault’s instructions on how to distinguish false arms from true ones.  Interesting in their own right, they also hint at the likelihood that there was a significant proliferation of false arms in medieval Europe.  Rolls of arms like the one above offered one way of recording legitimate arms and their rightful bearers, but apparently false arms might also give themselves away through incorrect choices of tincture (that is, the colors, metals, or fur patterns used in heraldry).  Mixing or (gold) and argent (silver), for example?  A major no-no. 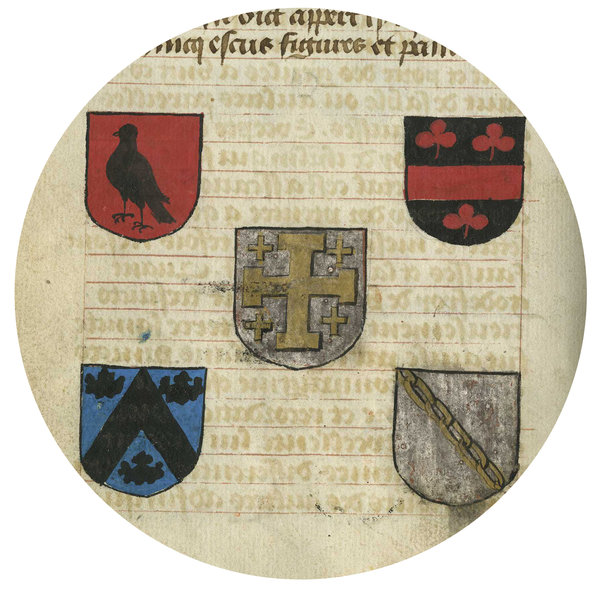 Prinsault’s chapter on the symbolic meanings of the colors and metals assigned in heraldry is also a fascinating read.  For each of these tinctures, Prinsault identifies corresponding virtues, gemstones, signs of the Zodiac, elements, humors, planets, and even days of the week. 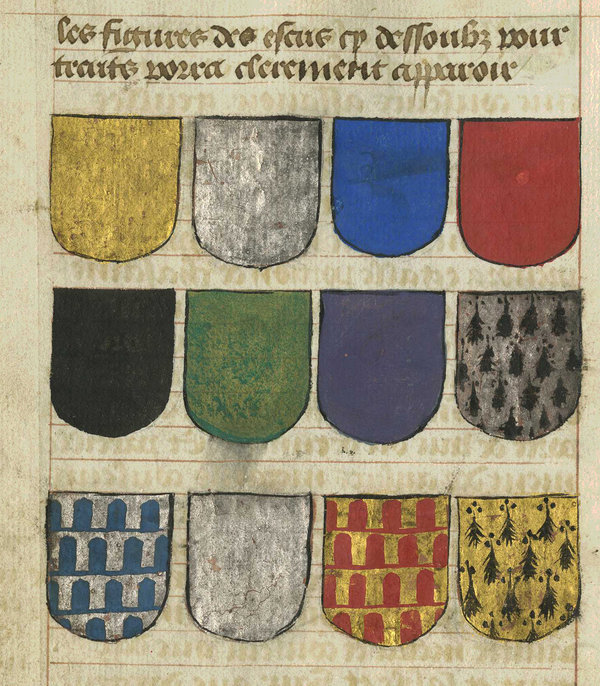 These shields illustrate the tinctures used in heraldry, detail from TM 818, f. 4v

You might not be surprised to learn that the tincture gules (red) carried associations with the ruby and the element of fire.  But what about Prinsault’s connection of the tincture to the virtue of courage, the zodiacal signs Aries, Leo, and Sagittarius, and the choleric humor (associated, among other things, with a quickness to anger)?  And, if those make some amount of intuitive sense, what of its association with Saturday (or Tuesday, in this particular manuscript)? 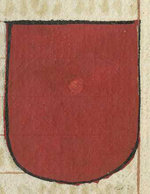 Perhaps most fascinating of all, though, are the coats of arms themselves.  In addition to the fairly simple coats of arms Prinsault uses to teach the fundamentals of blazoning, he includes some more challenging arms at the close of the treatise, presumably as a final challenge to the reader, now well-schooled in the basics. 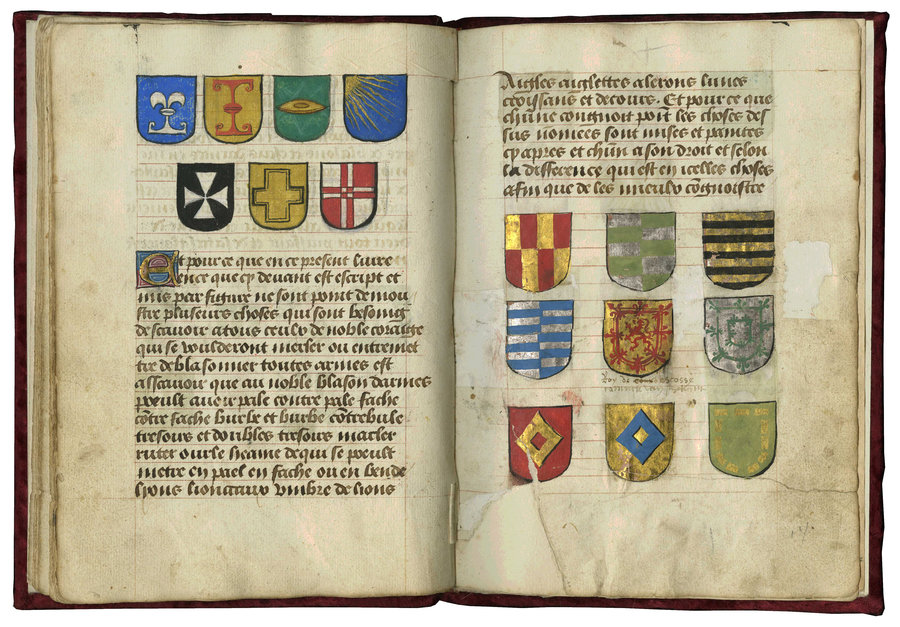 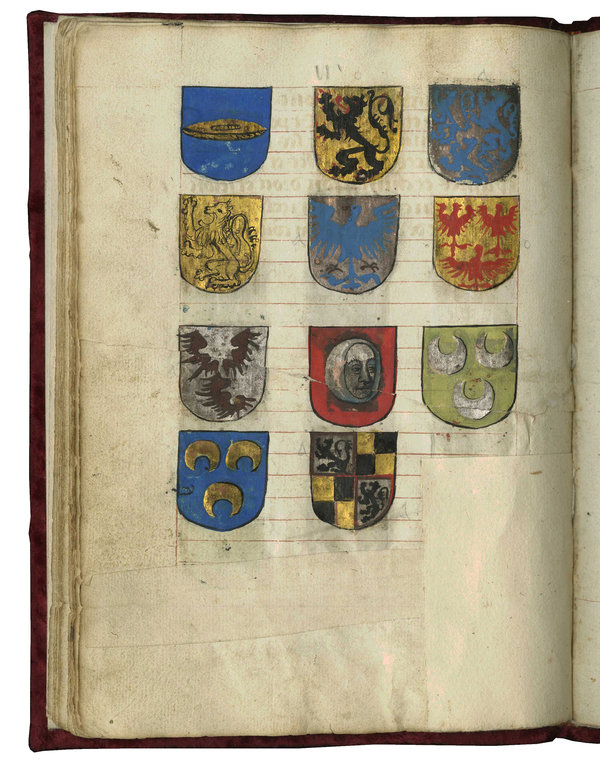 Shining with their brilliant tinctures and alive with leaping dolphins and rampant beasts, these arms offer a glimpse of the vivid pageantry with which medieval knights displayed their true colors.