Beauty is in the Eye of the Beholder

Some medieval and Renaissance manuscripts survive in almost pristine condition.  There is a special pleasure in turning the pages of manuscripts such as our copy of Thomas Aquinas’s commentary on Aristotle’s Ethics (TM 629) 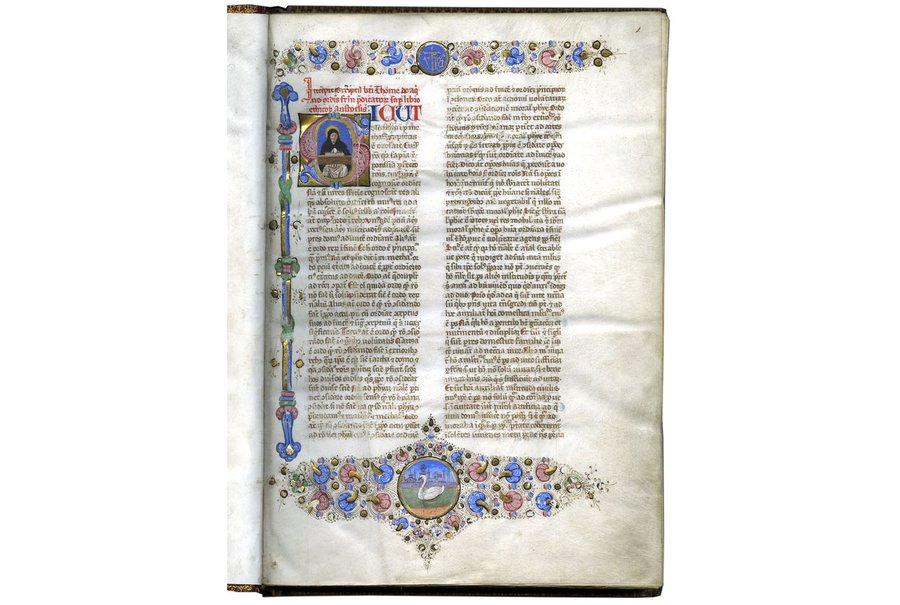 Copied c. 1470 in Venice and illuminated by Leonardo Bellini or a close associate, this large and beautiful manuscript is almost as fresh and clean as the day it was made over five hundred years ago.  Who among us can’t appreciate the beautiful script, the large and clean margins, and the beautiful colors and polished gold of the initials (not to mention the swan swimming peacefully in the border on the first page).

In fact, there are many modern historians of the book, and some collectors, who might find this copy of Thomas Aquinas, however beautiful, to be not quite to their taste.  These scholars delight instead in manuscripts with dirty corners and added notes – the more, the better.  Instead of viewing these details as imperfections, they regard them as precious evidence that allows us to understand how books were read over the years.  (Here is a link to Professor Kathryn Rudy’s article on “Dirty Books,” which studies the density of fingerprints in prayer books).

TM 789, a thirteenth-century Psalter from Germany from the diocese of Constance or Augsburg, is a perfect example of a manuscript showing signs of use on almost every page.  There are added prayers, 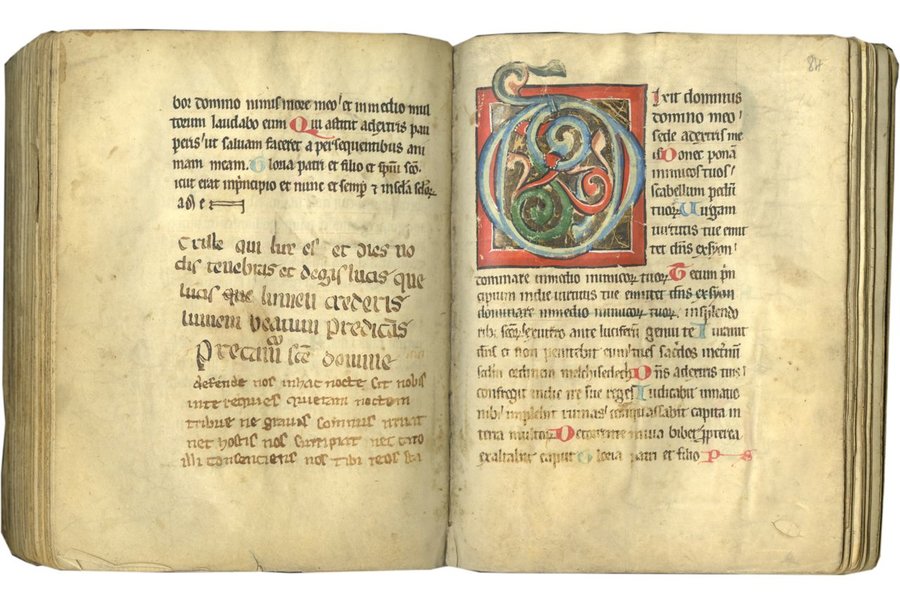 and corners that are worn and dirty from generations of 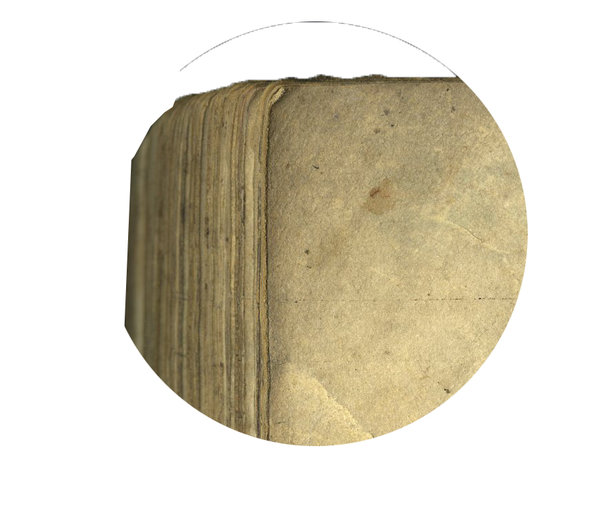 The illuminated initials are far from pristine, and indeed, many have been almost entirely rubbed away. 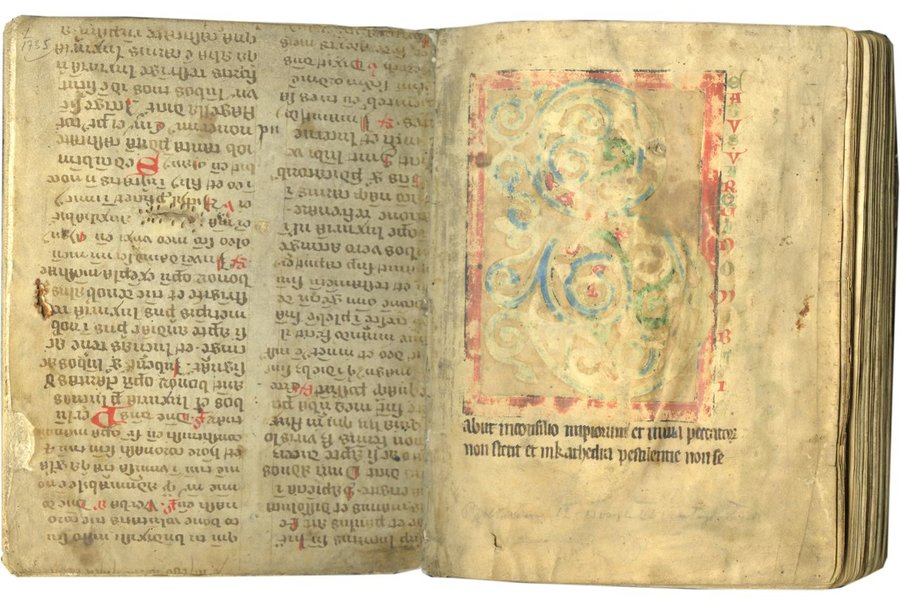 How these initials damaged remains a bit of a mystery – were they damaged through damp, or some other physical mishap? Were they scraped to re-use the gold, and perhaps even some of the pigment? That is also a possibility.

This Psalter is unusual since it includes pictures of the two great saints of the thirteenth century:  St. Dominic, who died in 1221, and was canonized in 1234, and St. Francis, who died in 1226, and was canonized soon after in 1228. When it was copied, its original owner, almost certainly a lay person, would have revered these two great recent saints.  But by the fifteenth and sixteenth centuries, the Friars were objects of waves of criticism in many parts of Europe, including Germany.  Look at the two initials depicting these saints. 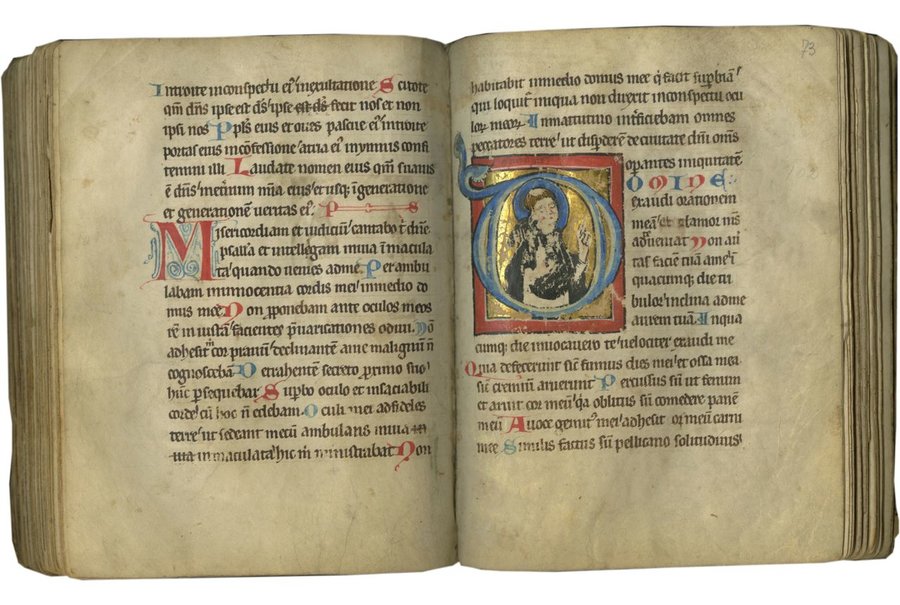 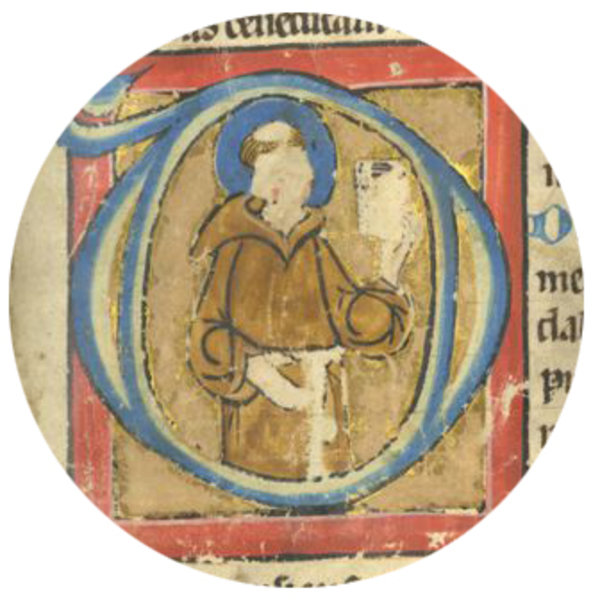 The damage to these two initials looks like more than simple wear and tear from years of use.  Parts of St. Dominic’s hand and face have been scraped away.  In the case of St. Francis, the damage is much more extensive.  Note how his face, hand, the rope that fastened his tunic, and the book he is holding, have been almost completely obliterated.

Is it possible that these two initials – and in particular the image of St. Francis – were deliberately disfigured to express someone’s disapproval of the Mendicant Friars? Perhaps.  But it is even more likely that these initials were unintentionally damaged by people who loved these saints, and who touched, or even, kissed their images while praying.

Similar damage in fact can be seen in this manuscript at the British Library, where the body of Christ has been almost totally worn away through years of devotion.  The body of his torturer on the right, in contrast, may have been obliterated in iconoclastic anger. 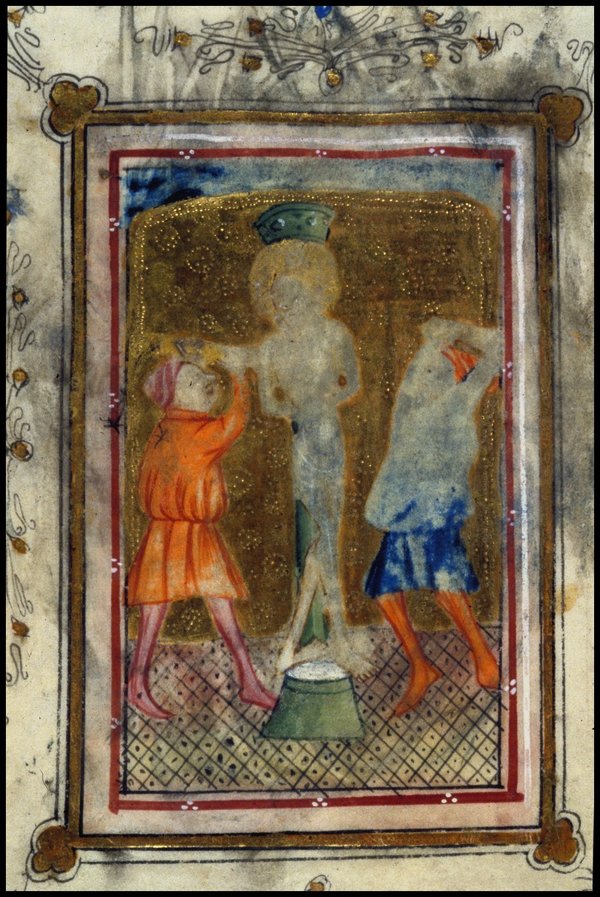 In closing, take a look at the beautiful image of St. Michael slaying the dragon found before Psalm 51 in the same manuscript.  There is a little wear to this initial, especially on St. Michael’s robe, but his face and hands are intact.  The amount of wear to this image, compared with the more extensive damage to the images of the two mendicant saints, seems quite striking. 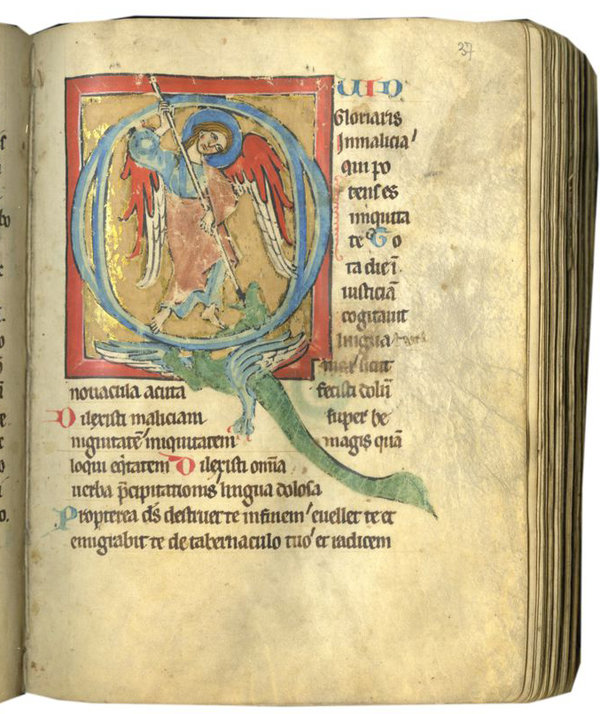 Further examples of the physical evidence left behind by the people who made, used, read, and owned manuscripts can be found in our latest exhibition, Traces: People and the Book , on view in our New York gallery until April 23.  You can also explore the show from afar in the exhibition catalogue, now available for purchase or download on our site.