The sky has been a source of both great mystery and of great inspiration throughout human history. 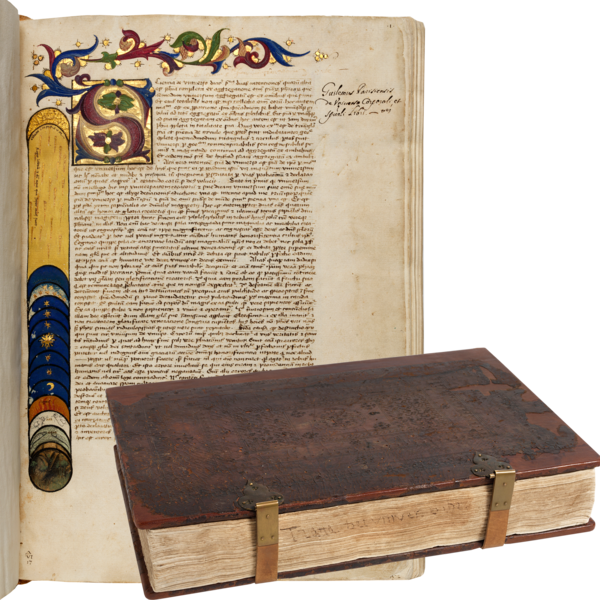 Our desire to understand Earth’s relationship with the heavens has led to the invention of impressive machines from dirigibles, to airplanes, to satellite monitoring systems; it’s led to space exploration and maybe, someday, will even lead to the colonization of Mars - that is, if Elon Musk manages to succeed with SpaceX. 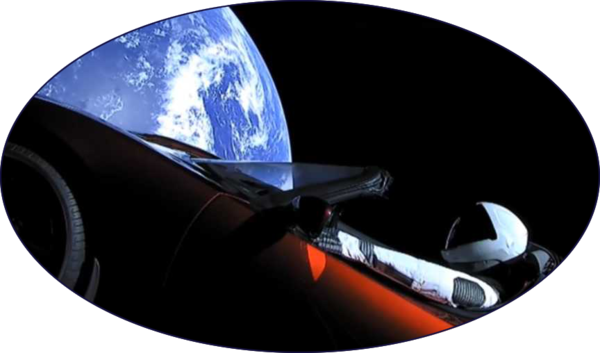 Will our fascination with the heavens one day lead to habitation?  Elon Musk’s SpaceX program launched the Falcon Heavy rocket with a Tesla Roadster as a dummy payload in February of 2018.

How has the organization of the universe been understood historically?  How have people attempted to triangulate our place within it? Interest in cosmology, that is the study of the origin, structure, evolution, and eventual fate of the universe, has been a human concern probably for as long as humans have been on this planet. 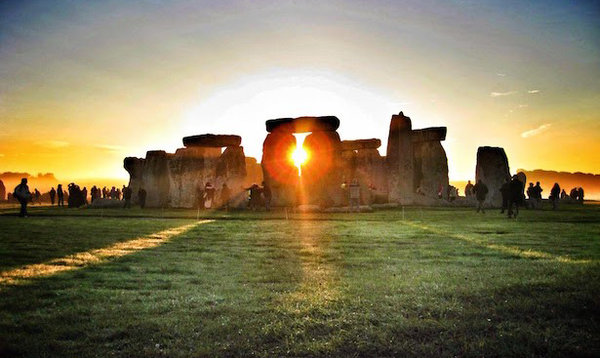 Stonehenge attests to the long history of human fascination with the sky.  It is a prehistoric monument from Wiltshire, England, constructed from 3000 BC to 2000 BC.  The monolithic stones of the site are aligned to the sunset of the winter solstice and the opposing sunrise of the summer solstice, as pictured above.

One of the earliest models of the universe, which was based on the idea of celestial spheres, was developed in Ancient Greece in the early sixth century BCE by Anaximander.  The Greek philosophers Plato (d. 348/347 BCE, Aristotle (d. 322 BCE), and Ptolemy (d. 160 CE), all developed their own cosmological models of the universe to explain its structure and fate in turn.  These cosmological models depict the planets and stars embedded in rotating spheres made of an ethereal, transparent fifth element like jewels set in orbs. 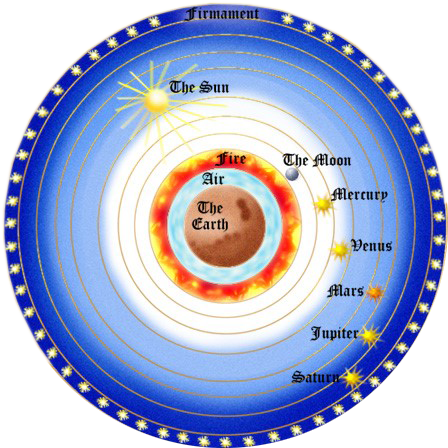 A modern interpretation of the Aristotelian Universe, with the earth in the center, the elements above, then the celestial spheres, and finally the firmament.

During the Middle Ages and the Renaissance, people combined the Ancient Greek theories of cosmology with Christian teachings about creation.  People wrote about their ideas, and, often, artists attempted to illustrate them.  A very beautiful interpretation of the celestial spheres is found on the first page of a fifteenth-century copy of William of Auvergne’s De universo, Les Enluminures, TM 697. 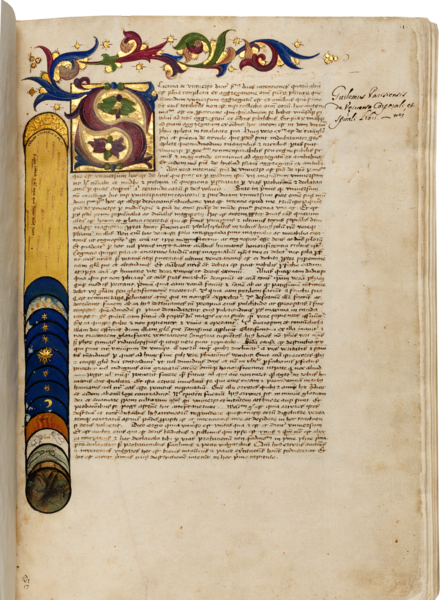 It is a strikingly original interpretation, which at first glance doesn’t even look like a picture of the universe.  Instead of a round diagram, with the earth in the center, this image looks like a stack of coins or a totem pole, running the length of the page vertically.  It encourages the viewer to read from the top label caelum empireum (meaning “Heaven’s kingdom”) down to the earthly realm (which, significantly, is not labeled, but distinguished by the visual suggestion of a wooded forest within the bottom-most sphere).

William of Auvergne (c.1180/90–1249) was a theologian and philosopher, and also bishop of Paris from 1228 until his death in 1249.  William and his contemporaries were among the first thinkers in the Latin West to begin to grapple with the writings on natural philosophy and metaphysics by Aristotle, Ptolemy, and other Greek, Islamic and Jewish thinkers that had recently become available in Latin translation. William’s treatise, De Universo (On the Universe), is a very long text (six hundred pages in the printed editions), and it begins with a discussion of cosmology and the structure of the universe (bringing the idea of earth and the celestial spheres into a Christian worldview).

The firmament is the vast solid dome referred to in the Vulgate as the “waters” (here labeled aque) above the atmosphere, shown as the vast golden space separating the first earthly celestial sphere (primum mobile) from the heavenly realm (caelum empireum).

To appreciate the bold vision of our artist, let’s look at examples of more traditional images of the celestial spheres from the Middle Ages; most of these images are nested, egg-like models. 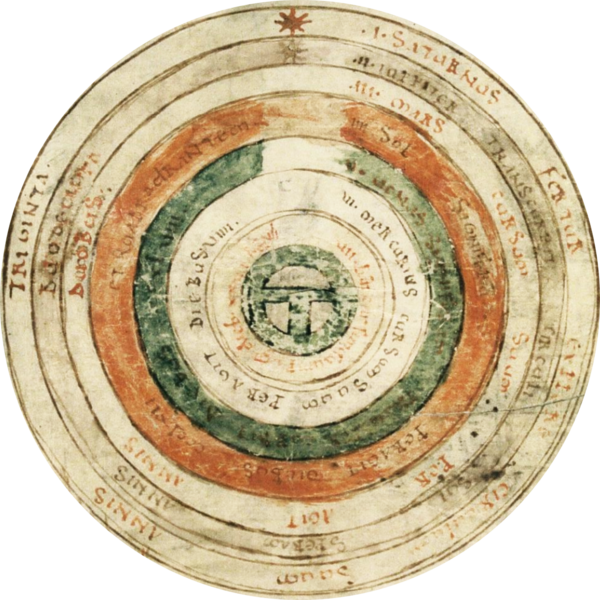 A simplified version of the celestial spheres can be seen in an image of biblical creation, “The Creation of the World” in the Stammheim Missal, made in Hildesheim, Germany, sometime in the 1170s. 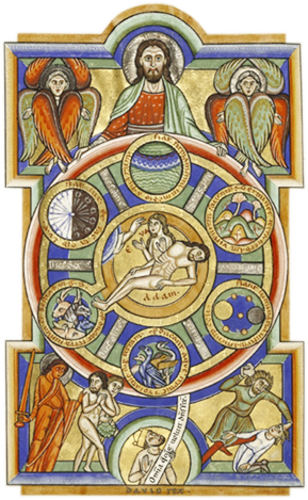 One image that also departs from the “usual” is by Hildegard of Bingen (1098-1179) (this will not surprise anyone familiar with Hildegard’s amazingly creative thought and imagery).  Her famous image “The Universe” – commonly known as the “Cosmic Egg” –combines previous creation images and the imagery of celestial spheres into a fiery vision of a post-Lapsarian cosmos (meaning the universe as it is after the fall of man). 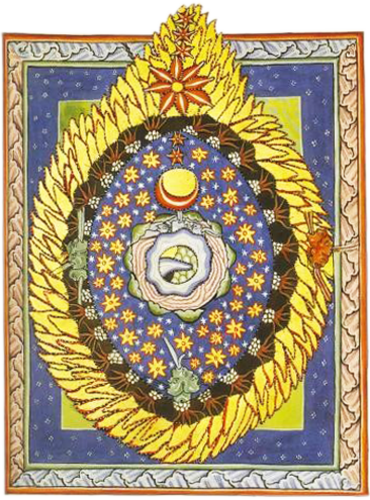 Scivias was Hildegard of Bingen’s first, and perhaps the most famous of her writings. Scivias, (“Know the Ways”) describes 26 of Hildegard’s most vivid visions.  It is renowned for its 35 astonishing and unusual images.  Today, the Vatican contains a copy of Hildegard's Scivias from the convent she founded in Rupertsberg, (Vatican Library, MS Pal. lat 311).

The image in the William of Auvergne manuscript is, in fact, strikingly similar to the visual interpretation presented by the “Cosmic Egg,” but diverges in the composition of the celestial and earthly realms.  Close to the sentiment of the “Cosmic Egg,” yet still borrowing the orderly structure of the celestial sphere, the De universo image reads from top to bottom. It begins with the heavenly domain then presents a golden comet-like streaked firmament.  Following this is a series of nine deep blue spheres (labeled “mobile”), each interspersed with a variety of stars, the sun, with the last presenting a simple crescent moon. Finally, the lowest terrestrial spheres are elemental – fire, air, water, and two green and brown spheres representing earth. 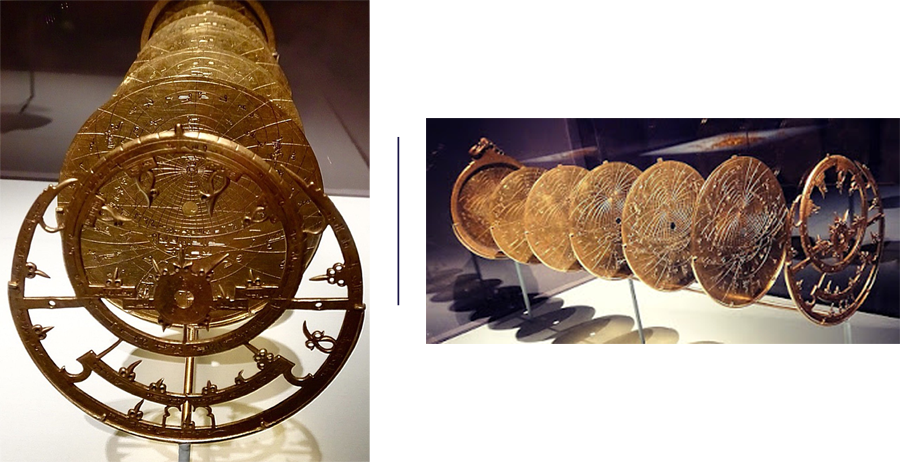 This display from the Metropolitan Museum of Art’s exhibition Jurusalem 1000-1400 suggests another origin for the unusual disk-like shapes found in TM 697’s illumination; the astrolabe. An astrolabe is a tool used for measuring the position of heavenly objects–– the stars, planets, satellites, and other celestial items.

There are many fascinating elements to the imagery used in the elemental spheres. Simple, licking flames wave red against an orange ground in the fire (ignis) circle. 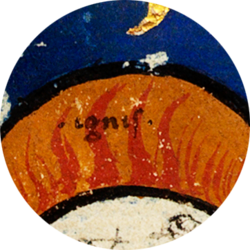 Then two immaculately rendered flies grace the air (aer) sphere, allowing the latticed paper below to show through. 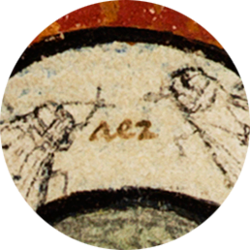 On a greenish ground, water (aqua) is characterized by a drawing of two leaping fish and curled, swirling forms. 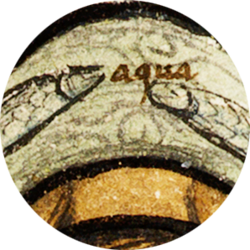 The two lowest unlabeled circles clearly represent a large tree surrounded by shrubs.  The division of “earth” into two circles perhaps incites the viewer to consider the element of earth separately from the earthly realm. 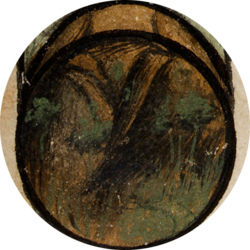 The artist who illuminated Hildegard of Bingen’s Scivias is remembered and praised for the radical interpretations of her equally profound texts.  In William of Auvergne’s De universo (TM 697), we find an extraordinary, but unknown and previously uncelebrated artist whose talent and creativity rival the interpretive power of the Scivias artist.  We do not know who decided to include the unique painting of the layered spheres of the universe at the beginning of this manuscript.  We do know, however, that its first owner was  Philippus Barbarycus of Venice, a member of the Papal Curia, who was active in humanist circles in Rome.  Could it have been his decision to illustrate the celestial spheres at the beginning of our manuscript? It seems quite likely.