Page numbers are one of the features of the modern book that we all take for granted since it seems such an essential – and simple – tool.

You may be surprised, therefore, to learn that medieval manuscripts do not include page numbers.  Some, although it is relatively uncommon, do include folio numbers (numbering the physical leaf rather than the page – each leaf or folio of a book, in other words, would be the equivalent of two pages in a modern book) – a subject for future posts for sure.

Scribes did need to keep things in order, however, especially before the manuscript was sewn together and placed securely in a binding.

Look at the mouse in this image.  You can imagine the disastrous results if it jumped on the pages the scribe is copying, scattering them to all corners of the room (the text of the book that Hildebertus is copying begins “Wretched mouse who angers me so often”). 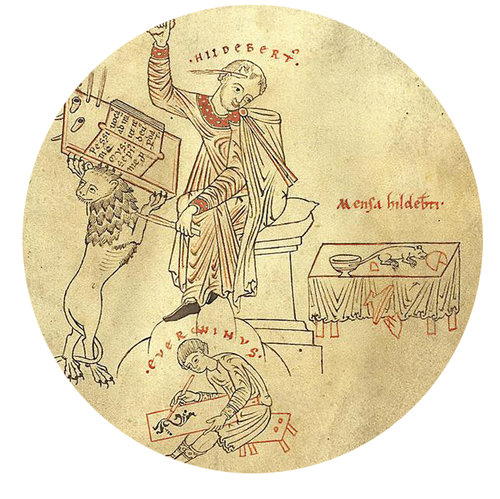 To understand how they did this, you need to understand that in the Middle Ages, manuscript books were made of a series of quires, that is groups of leaves folded in half, and then stacked one inside the other to form little booklets of varying lengths – often with four, five, or six leaves (i.e. eight, ten or twelve pages – remember?).  These quires were then sewn together to form the complete book.  Early in the Middle Ages scribes often simply numbered each quire, usually on the last leaf. 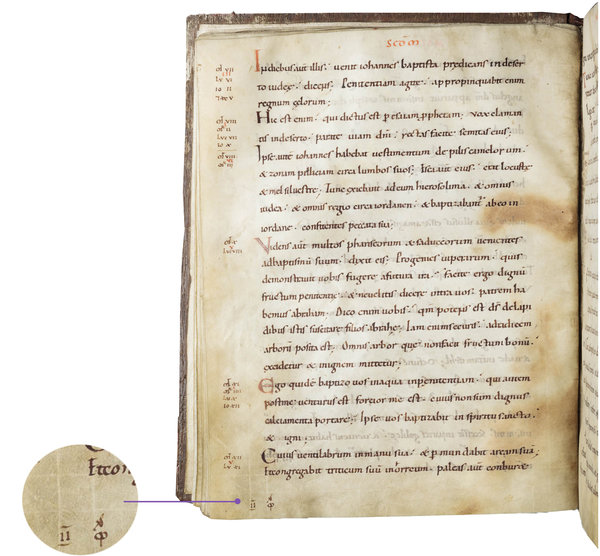 At some point in the twelfth century, some clever person came up with the idea of writing the first word of the next quire at the end of each quire; catchwords are a very effective means of keeping things in order, and they also make it impossible to mix up quires meant for two different books.  (In the thirteenth century an even more sophisticated system of leaf and quire signatures appeared – but again, something to discuss in a later post.)

These utilitarian aspects of the book can be fun – some scribes decorated them. 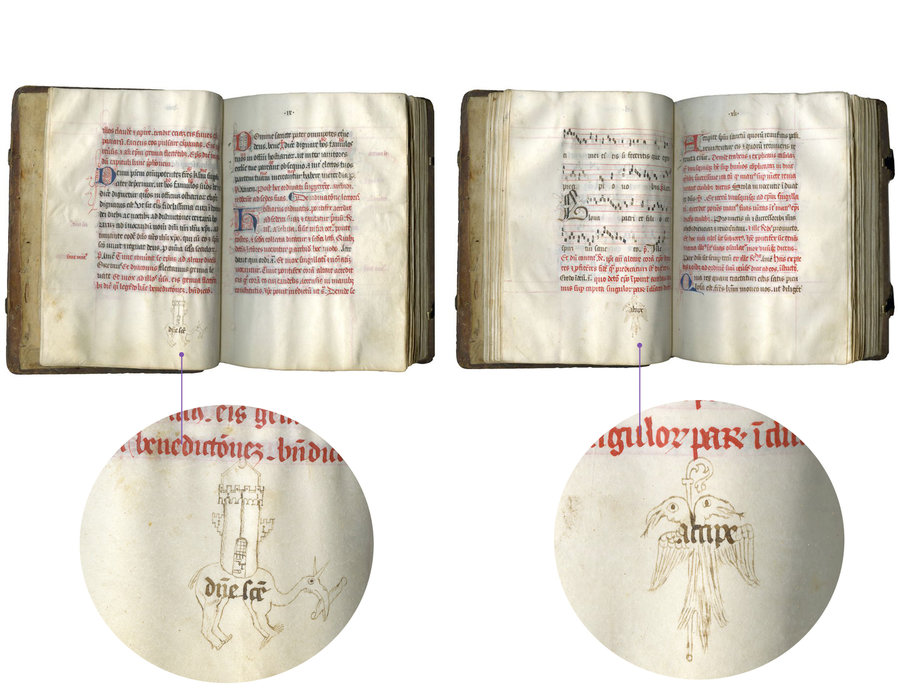 And other scribes seem to have been really eager to make sure that things didn’t get out of control.  In this thirteenth-century Breviary from Italy, the quires are numbered with a bold red Roman numeral, and the scribe also (redundantly), added the catchword, in red or the brown ink used to copy the text, decorated with squiggly lines.

Here is a picture of the end of the original first quire,

Later users of this book – perhaps because they knew you didn’t need both – appear to have erased two of the catchwords in subsequent quires.

In one case, the catchword isn’t erased; note that it reads “ec est.”  The following page begins “Hec est”, but the “H” is a blue initial decorated in red.  The catchword reflects accurately the next words the scribe would copy, since he must have left a blank space for the colored initial, which was added later (if you look very closely though, the scribe did add the “h” in a  tiny letter off to one side).  It was probably the scribe himself who filled in the colored initials and other colored details in this book, so he was covering all the bases (true to the over-careful personality that emerges from these details). 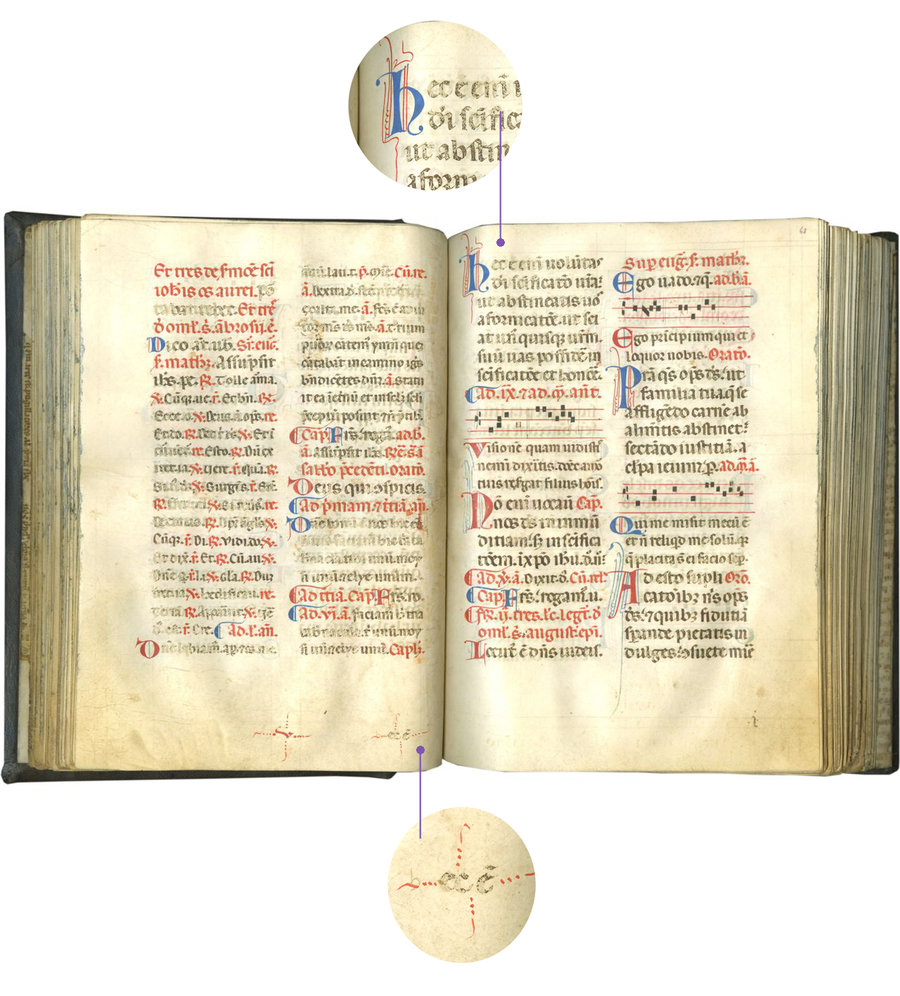 Is this important? Well, certainly not earth-shaking.  But I would argue that it does tell us something about when and how this manuscript was copied.  Perhaps this scribe wasn’t completely comfortable with the “modern” idea of a catchword – was he old? Or was this manuscript copied somewhere a bit isolated or provincial?  It might also be a clue that could allow us some day to find other books copied at this scriptorium by this scribe.

As a last note, this manuscript actually has a third system of numbering the quires – several texts are added before the Breviary text itself, including a calendar, organized over three quires.  Someone – I would guess the fifteenth-century binder of the volume – added letters at the beginning of the quires in a series that include these preliminary texts. 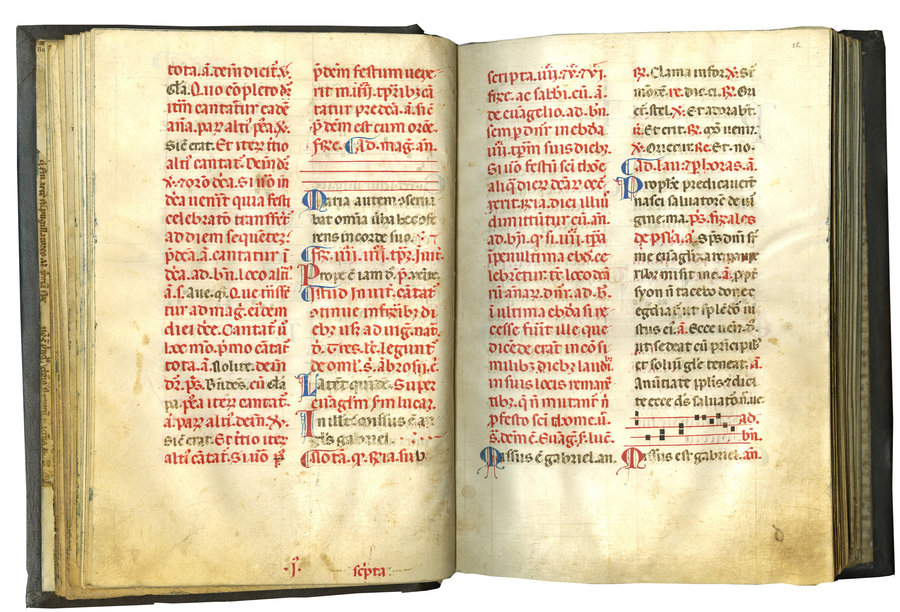 A full description of TM 785 can be found here