The Shape of the Thing:

the Scroll, the Codex, and Hebrew and Latin Bibles

The iconic image of a Hebrew Bible is the Torah Scroll, the Sefer Torah ­– monumental scrolls containing the entire Pentateuch (the five books of Moses, Genesis, Exodus, Leviticus, Numbers, and Deuteronomy) that are used for public reading during prayer services. 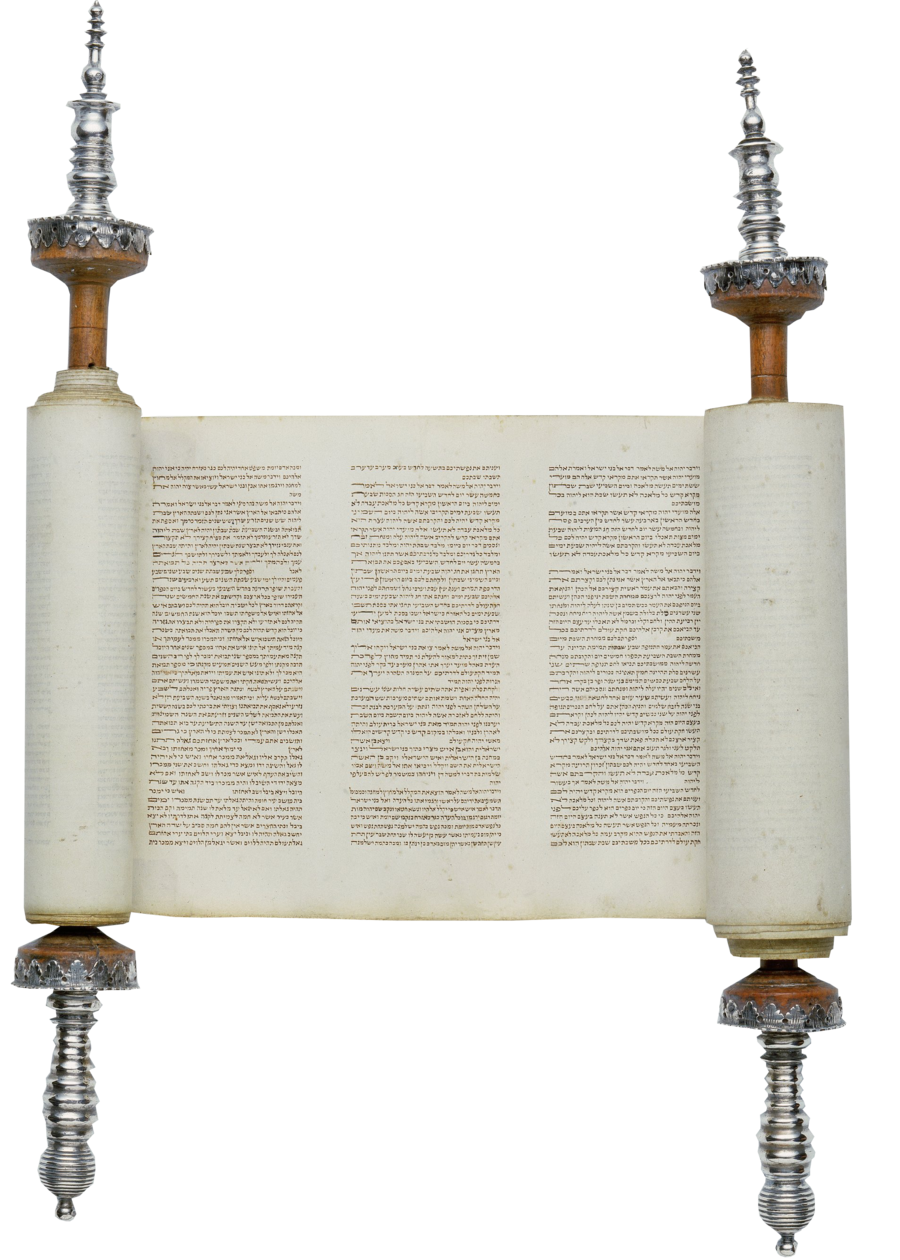 Torah scrolls today are still copied by scribes on parchment; they are faithful in form and content to the scrolls copied thousands of years ago in the third or fourth century of the Common Era. (See our previous blog on the Dead Sea Scrolls for a look at the very earliest examples of the Hebrew Scriptures, predating the earliest Torah Scrolls). 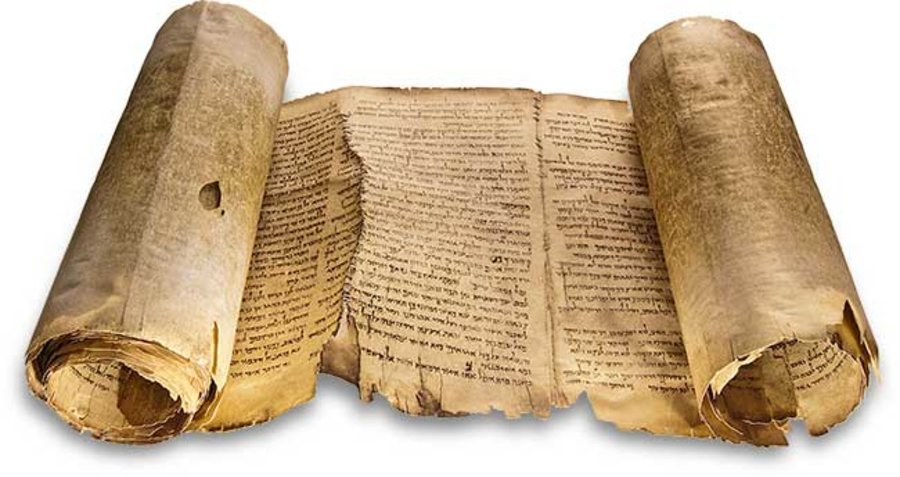 The Great Isaiah Scroll, 1QIsa The Isaiah Scroll is the only complete biblical book surviving among the Dead Sea Scrolls. Found in Cave One at Qumran in 1947, it dates from about 120 B.C.E.

Think of a Christian Bible, in contrast, and you will almost certainly think of a book in codex form, the technical word for the type of book we still used today ­– a rectangular object presenting text on a series of pages hinged together on one side.  (Of course, nowadays, there is an alternative.  When I said “Bible” did you think of scrolling text read on your computer or your phone?  Even so, for now let’s stick with the image of a book).

One (of many) iconic images of the Christian Bible is the very first book printed by moveable type, known as the Gutenberg Bible. 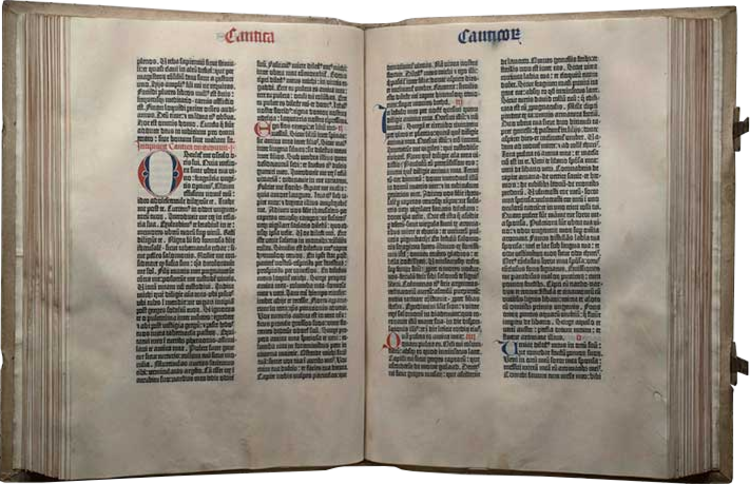 Before the invention of printing, Christian Bibles, like Torah Scrolls, were copied by hand.  This example is a large illuminated Bible from thirteenth-century Paris. 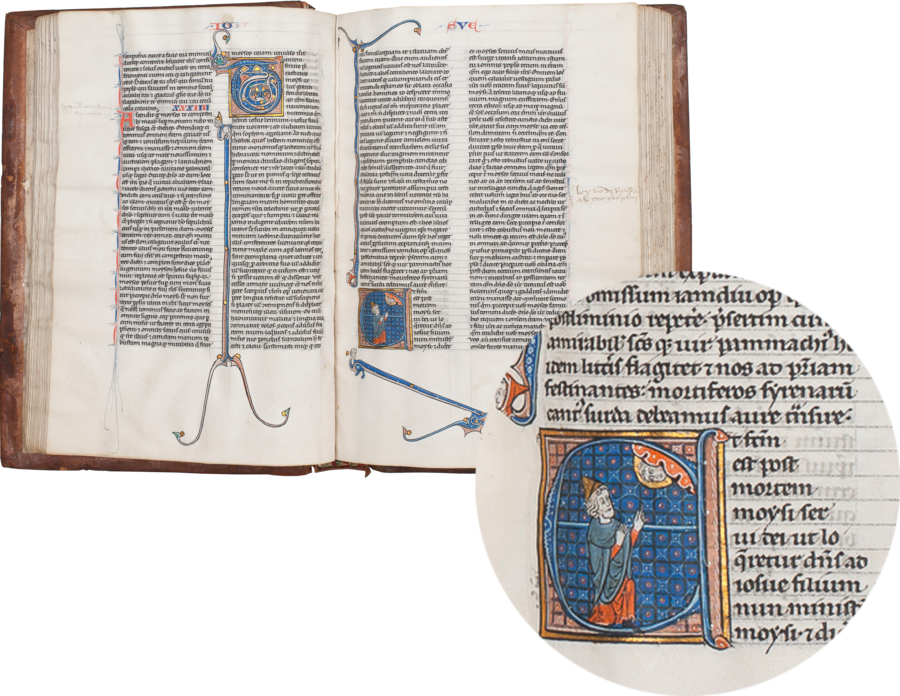 There are many reasons that early Christians in the second and third centuries adopted the codex format – some historical, some practical.  The identification of early Christian texts, including the Bible, and this new format is in fact so close that scholars have argued the codex was deliberately chosen by Christians as a way of distinguishing themselves from their non-Christian contemporaries who wrote on scrolls.

Any of us can agree that these two types of books, the Hebrew Torah Scroll, and the medieval Latin Bible (or the printed Gutenberg Bible) in codex form, are really different.  But during the Middle Ages, (scholars are still debating exactly when, but possibly as late as the ninth or even tenth century), Jewish scribes began to copy Hebrew Bibles as codices.  Although Hebrew biblical codices never replaced the Torah Scroll for liturgical use, codices were used for public reading, study, and private devotion.  Like contemporary medieval Latin Bibles, the variety of their contents and format are important clues to how they were used.  It is easy to emphasize how these two traditions of making Bibles differed; I think it is just as interesting to think about features they have in common.

Here are a few examples.

This copy of the psalms from twelfth- or thirteenth-century Spain is now incomplete, and includes only part of the Psalter.  Based on its size and format, it is very likely that it originally included all the psalms, but no other books of the Bible.  It is a book in a convenient size (measuring c. 225 x 170-175 mm.) that was well suited for private prayer and study. 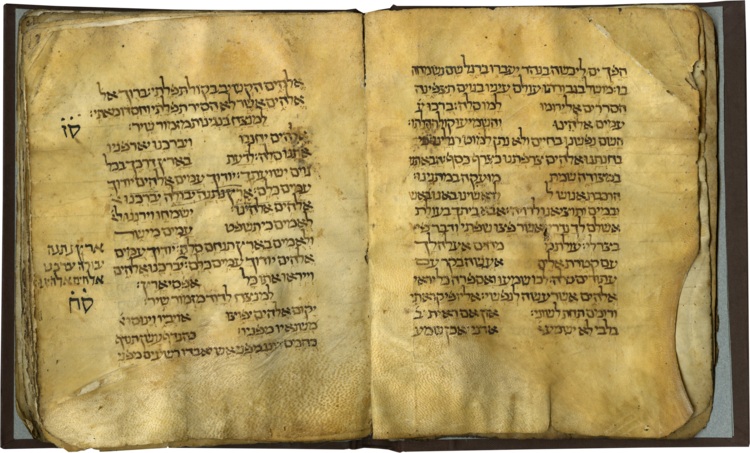 It is copied in a beautiful script, but it is admittedly an austere book compared with this Latin Psalter, copied for a lay person in Germany in the thirteenth century, that includes initials with images of Saints Michael, Francis, and Dominic.  Slightly smaller than our Hebrew Psalter (196 x 145 mm.), this book was also used for private devotion. 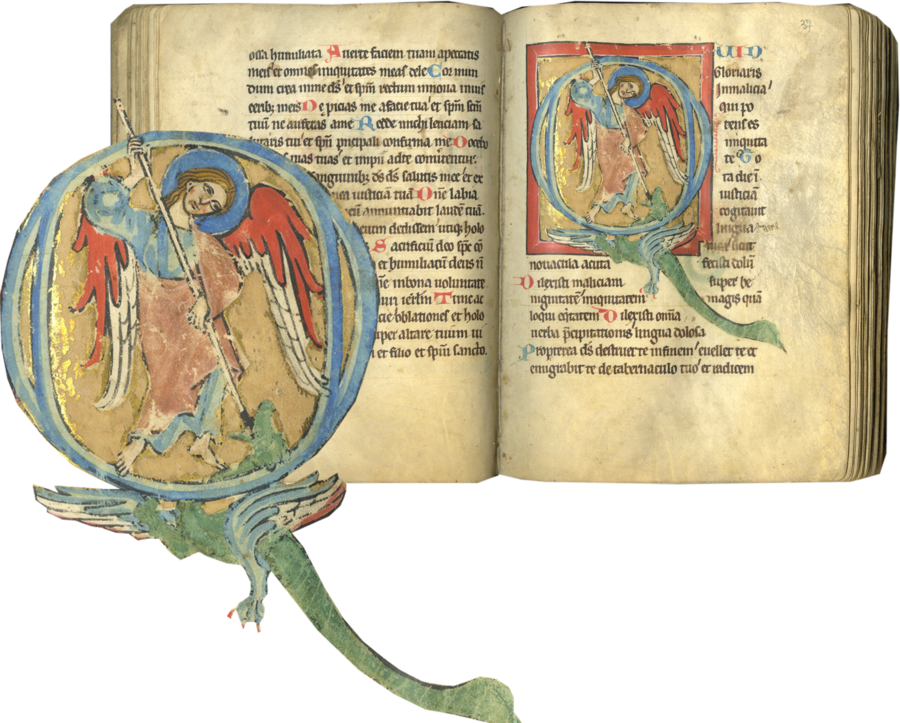 Even smaller than the Spanish copy of the Psalms, measuring only 170 x 115 mm., this little book from thirteenth-century Germany or Northern France includes the first book of the Bible, Genesis.  It must also have been copied for someone’s personal use.  Its owner may have used it as a study copy, and it is even possible that he brought it along to the synagogue to follow the readings from the Torah (the division of the Torah portions is indicated in the text). 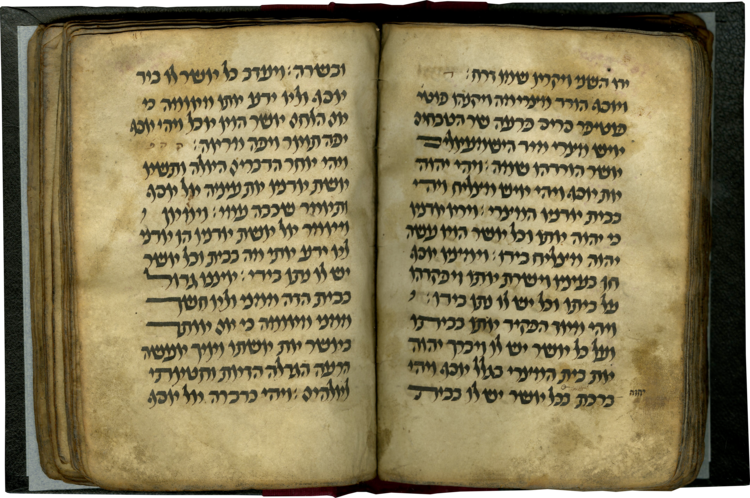 Is it a coincidence that many contemporary Latin Bibles were also copied in a very small format? Probably not; the two communities lived side by side.  Admittedly, although similar in size (this book measures 172 x 123 mm.), this thirteenth-century Latin Bible from Spain is quite different than the Hebrew copy of Genesis, since it includes the entire biblical text from Genesis through the Apocalypse, compressed into one tiny, portable volume. 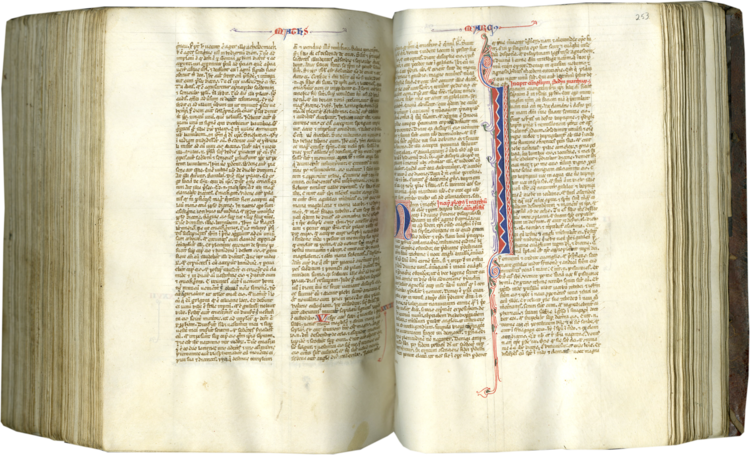 One important contrast between Jewish and Christian Bibles is what happened to their Bibles when they were no longer actively used.  In the Jewish tradition, books with the name of God (and especially books of the Bible), were sacred.  They couldn’t be thrown away or otherwise discarded, but instead were buried according to a special religious ceremony.  Before they were buried, communities kept them in storage places known as Genizot.  The most famous of these was the Cairo Genizah, which for some reason was never emptied for centuries, and contained thousands of fragments of manuscripts, some dating as early as the ninth century. This treasure trove was “discovered” by modern scholars in the late nineteenth century. 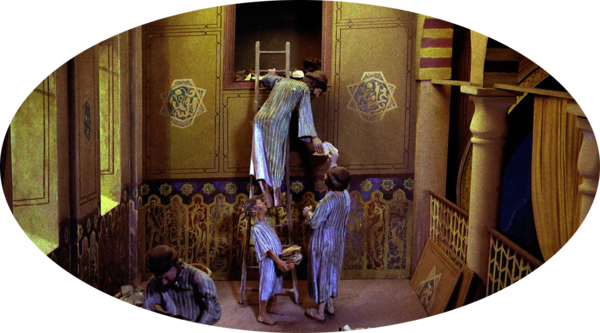 Putting documents into the Geniza at the Ben Ezra synagogue in Cairo - Diorama Beit Hatfutsot, the Museum of the Jewish People, Tel Aviv

This manuscript containing part of the Pentateuch (Leviticus, Numbers, and Deuteronomy) is from Yemen, home to a Jewish community from antiquity.  We think that it was copied by a Yemenite scribe from the Benayah family, famous for the accuracy and beauty of their books.  If you look in the margins you can see the notes on how to copy the Bible with the correct vowels known as Masorah (in very tiny script or micrography).  At some point in its history, this venerable codex made its way to Cairo, where it was eventually deposited in the Genizah (TM 867 and 909 may also have been preserved in this way). 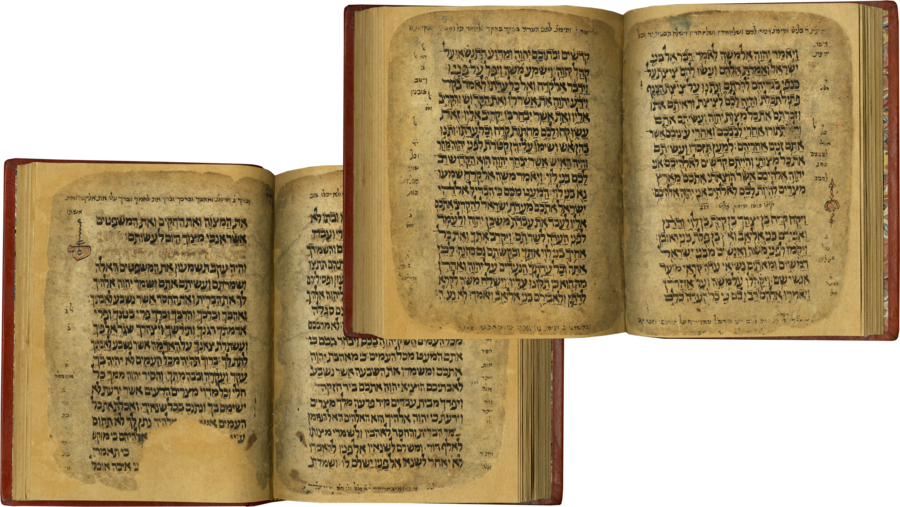 Did medieval Christians see their Bibles as sacred objects?  This is a very tendentious and under-explored topic.  I would suggest that although medieval Christians certainly revered the text of the Bible as a sacred, for the most part the actual manuscripts containing  the Bible were not treated much differently than any other books (the one exception to this might be Gospel Books).  Any thoughts on this?  Comments are welcome. 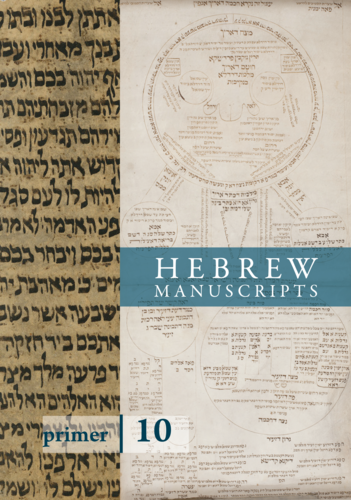 You can read more about these books at textmanuscripts.com, and in our newest Primer (no. 10!), on Hebrew Manuscripts.