One of the questions we are asked most frequently about medieval prayer books, especially Books of Hours, is how they were actually used.  Sure, they contain the prayers a devout lay person might have chanted throughout the day at the canonical hours long observed by medieval monks and nuns, but how many lay people actually made the time to do this? 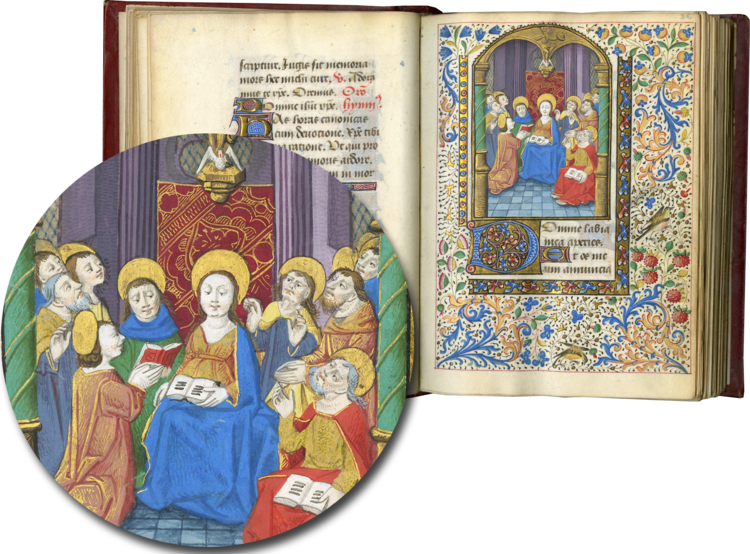 The Virgin Mary and the apostles surprised at prayer (with their prayer books in hand) by the Holy Spirit in this Pentecost miniature, BOH 131, f. 22, France (Troyes), 1460-1470

This is a question we’ve addressed before both here on our blog and in our Traces exhibition last year.  Historical records grant us insights into how books were used and treasured.  So do readers’ annotations in the margins of their books.  Even rubbed and soiled parchment can tell us which parts of a book were handled most frequently or reverently touched or kissed.  (This is a popular field of study right now, as scholars like Kathryn Rudy probe smudged initials and dirty margins for what they can tell us about medieval people and their books.) 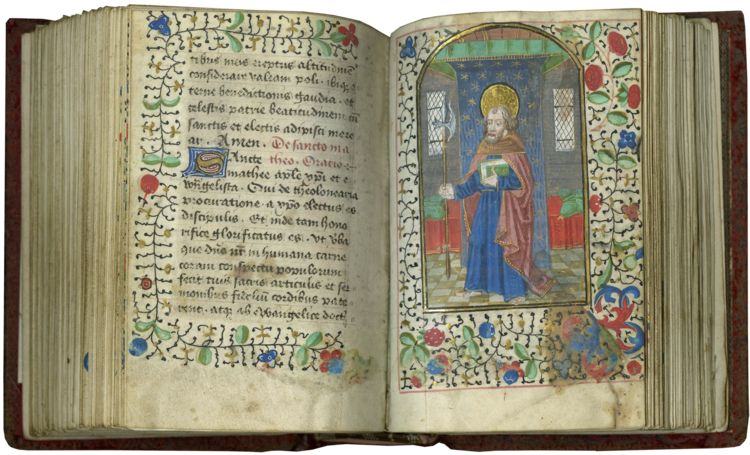 The dark triangular stain in the lower border may be a trace left from a pilgrim’s badge once placed in this profusely illuminated, idiosyncratic prayer book, BOH 110, f. 147, Belgium (Brussels), c. 1460 and France (Lille), c. 1475

If those manuscript traces can be said to whisper about their past, discernible only if we listen closely, the book shown below speaks far more loudly of its earliest users. 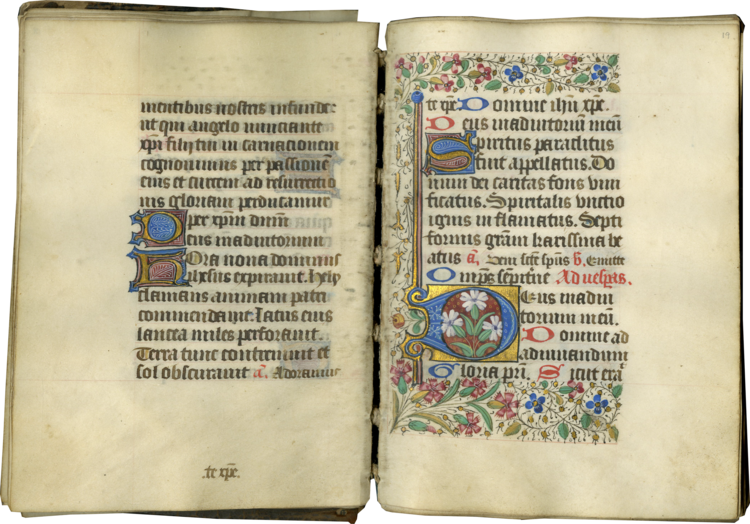 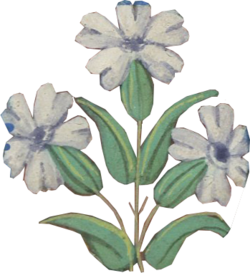 One of the books in our Text Manuscripts Spring Update, this fifteenth-century Book of Hours in a worn sixteenth-century binding appears initially to be a typical example of a late medieval prayer book.  Made for use in northwestern France, specifically in the diocese of Angers, it introduces the central texts of a Book of Hours with charming illuminated initials and frames them within flower-strewn borders.  But turn the pages of this this unassuming little volume and you will eventually stumble upon a hoard of treasures glittering up from the page. 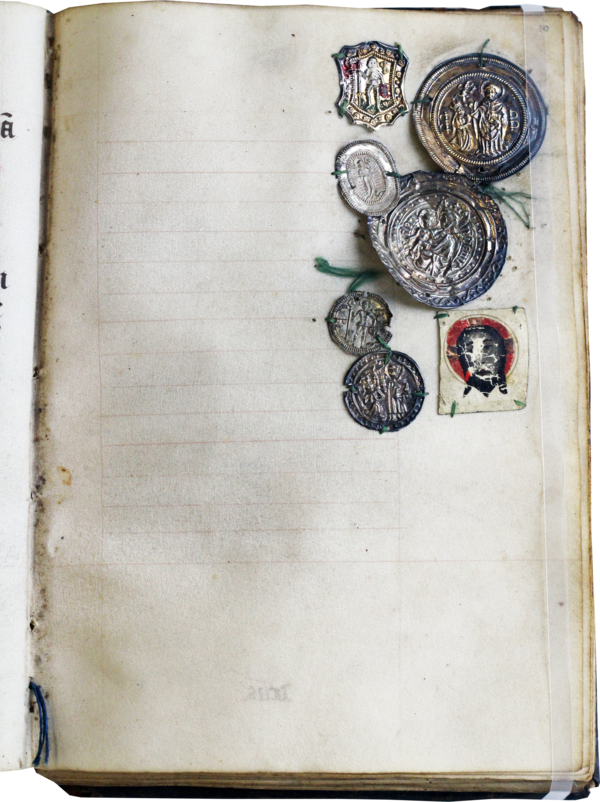 One devotional image, painted on parchment, and six of the seven badges sewn into this manuscript were attached to this page, with the green thread of the stitching quite evident on the reverse, TM 922, f. 10

These shining metal discs are pilgrims’ badges.  And their presence here is no accident.  Along with a diminutive parchment painting of the Holy Face (the impression of Jesus’s face left on the veil of Saint Veronica), they were stitched onto this page by an early owner of the book. 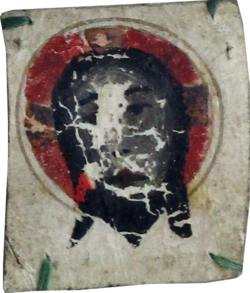 Paint has flaked away from this painting of the Holy Face where it was kissed or touched by a devout early owner, TM 922, f. 10 (detail) 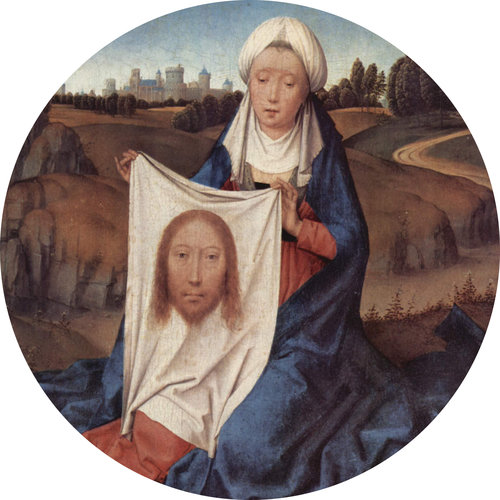 Veronica displays the impression of the Holy Face on her veil in this painting by Hans Memling, c. 1470, Washington D. C., National Gallery of Art (detail)

This practice was far from uncommon in Northern France at the time.  Traces of sewing holes and impressions left by badges testify that many Books of Hours once held these thin metal badges.  Sold as souvenirs at popular pilgrimage destinations, these badges could be worn by travelers as markers of their devout trajectories across Europe or even as protective talismans. 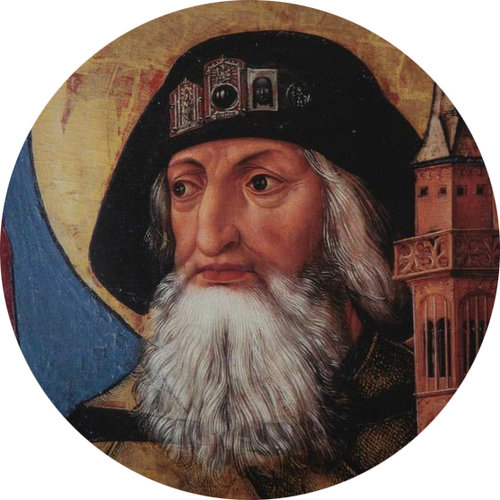 Pilgrim badges and a devotional painting adorn the hat of Saint Sebald, frequently depicted as a pilgrim, in this detail from the Saint Veits Altarpiece, painted by the Meister des Augustineraltars, 1487, Nuremberg, Nationalmuseum

When these pilgrims came home, some kept their badges safe within the pages of their prayer books. (Remember, a Books of Hour was far and away the book most late medieval people were most likely to own!)  But these books were not merely protective repositories. 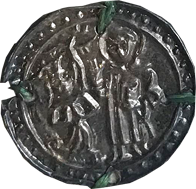 Badges were typically sewn with some deliberation into different sections of Books of Hours.  Here, for example, the six badges shown above were sewn into the Hours of the Virgin, on a leaf left blank (for the badges, perhaps?) between the canonical hours of Lauds and Terce, where they would have prompted the pilgrim-reader to recall his or her spiritual experiences of pilgrimage.  Even a later reader would likely have felt a sense of sanctity when touching these badges, physical remnants – extensions, even – of voyages to visit sacred sites and relics.  In the rare books in which they can still be found, badges sometimes also appear in margins beside particular prayers, to be folded into the devotions of a reader to particular saints.  In fact, artists emulated this practice, adorning the margins late medieval Books of Hours with painted renditions of pilgrims’ badges. 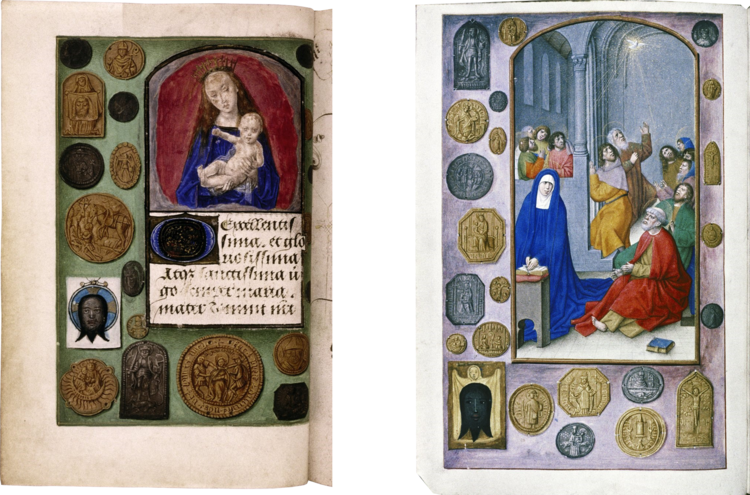 With a total of seven intact badges, our Book of Hours is second only to one other in the number of pilgrims’ badges it preserves, fully intact and still sewn onto its parchment leaves, and is one of only ten books in which any pilgrims’ badges remain at all (most of these with only a single badge).  And they are not only an incredible (and incredibly rare!) survival, but also a trove of information.  The assortment here give us a pretty good idea of where the book’s pilgrim-owner traveled and what his or her practices and preoccupations might have been while paging through this prayer book. 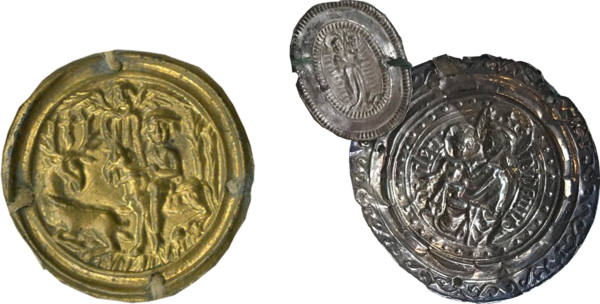 For example, a large badge depicting the Virgin and Child (above, on the right) bears the name of the pilgrimage church at which it must have originated: “notre dame de cleri,” that is, the Basilica of Notre-Dame de Cléry-Saint-André. 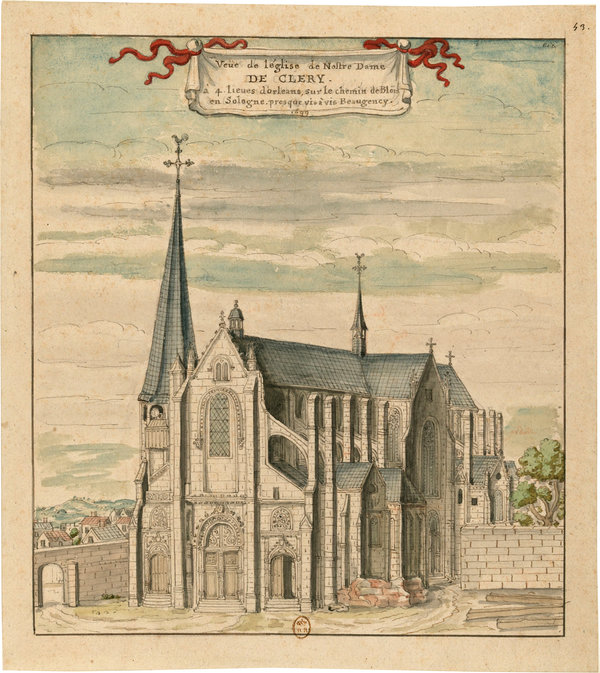 A 1699 rendering by Louis Boudan of the Basilica of Notre-Dame de Cléry-Saint-André, a pilgrimage site particularly loved by King Louis XI (reigned 1461-1483) 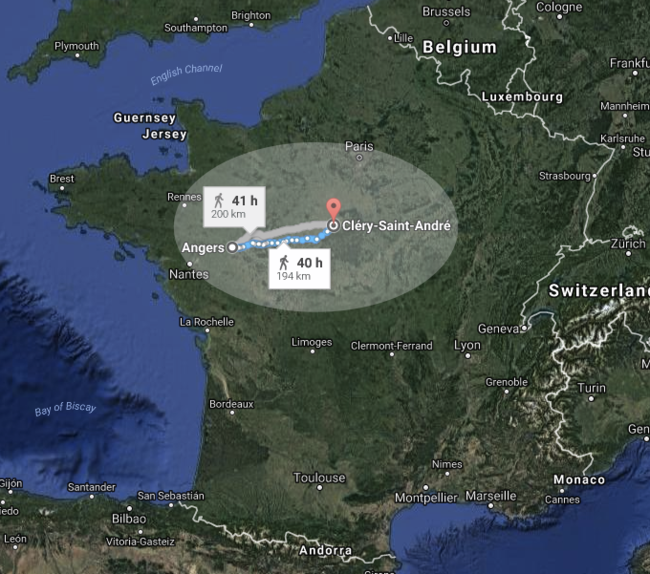 Two badges feature Saint Maurice, patron saint of the Angers Cathedral, a destination that was likely much closer to home for the book’s owner.  Maurice, an Egyptian, was leader of a legendary third-century Roman legion, the Theban legion, who were martyred for refusing to attack fellow Christians.

The tinting of the arms on one of these two Maurice badges aided in their identification, TM 922, f. 10 (details) 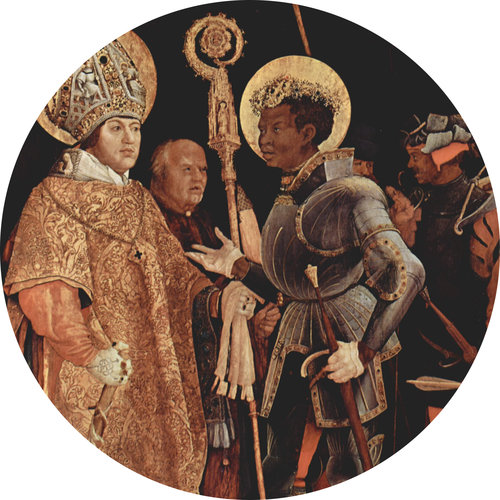 Because he hailed from Egypt, Saint Maurice was depicted from the twelfth century onward as a black African, and so he is here in this painting by Matthias Grünewald, c. 1517-c.1523, Munich, Alte Pinakothek

Saint Mathurin, shown in the two badges below exorcising an evil spirit from a Roman princess, Theodora, was venerated by pilgrims at the church of Saint-Mathurin, in Larchant.  Because the saint was frequently invoked against infertility during the Middle Ages, it is tempting to speculate that the pilgrim-owner might have visited his shrine in Larchant and treasured these two badges as she prayed for a child.

Look closely at these Mathurin badges and you can see the exorcised evil spirit leaping over the head of Princess Theodora, TM 922, f. 10 (details) 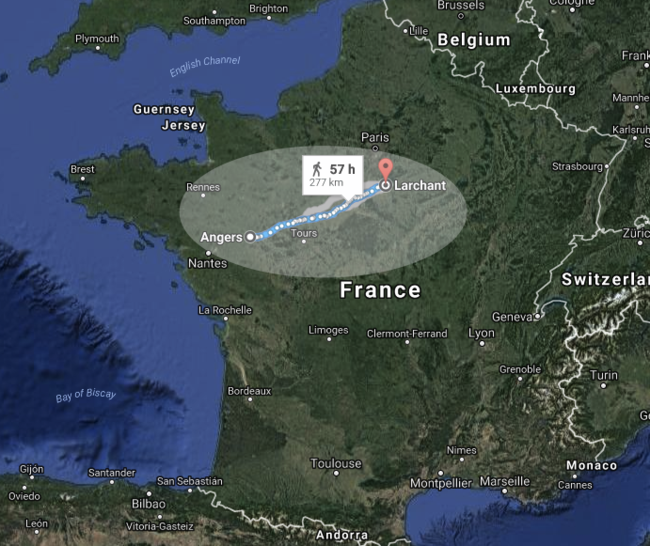 A picture begins to emerge from these sewn-in objects of an early owner, very likely a woman, who filled this volume with traces of her travels and preoccupations and devotions.  What we know of this book’s later history could fill another blog post all by itself (several family genealogies spanning the sixteenth through eighteenth centuries are recorded in its pages), but these earlier additions provide us a rare opportunity to make the acquaintance of an earlier user of this book and have a glimpse of how she used it. 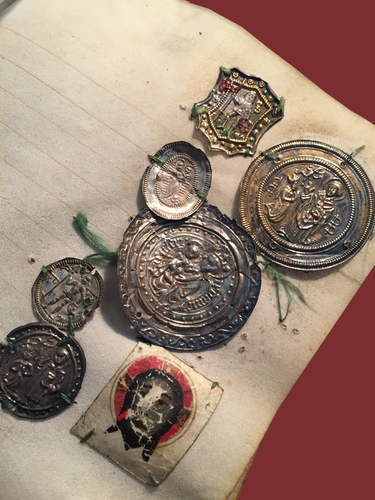 Want to learn more about this manuscript?  You can!  Check out this and other new additions to our inventory on our Text Manuscripts website.  If you want to spend some time exploring it, a previous blog post offers a handy guide to navigating our site.